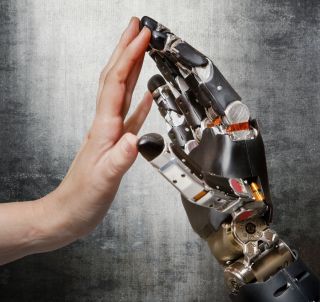 New research at the University of Chicago is laying the groundwork for touch-sensitive prosthetic limbs that one day could convey real-time sensory information to amputees via a direct interface with the brain.
(Image: © PNAS, 2013)

John Varrasi is a senior staff writer for the American Society of Mechanical Engineers (ASME). This article is adapted form one that appeared on the ASME website. Varrasi contributed this article to Live Science's Expert Voices: Op-Ed & Insights.

Following up on the success of cochlear and retinal prostheses, neuroscientists see a limitless horizon for related devices that will read electrical and chemical signals from the nervous system to improve quality of life for people suffering from injury or disease.

Such devices, neural prosthetics, will help a wide range of people, including people with epilepsy, wounded war veterans suffering post-traumatic stress disorder and traumatic brain injury, people with treatment-resistant depression and chronic pain, victims of Alzheimer's disease, people with speech disabilities, and individuals who have sustained spinal cord injury and loss of limbs.

But before neural prosthetics can advance, engineers will need to design and fabricate devices that can survive in the harsh environment of the human body, without causing tissue infection and other serious adverse conditions. In addition to enhancing materials performance, researchers are developing interface technologies that enable micro-devices to safely reside in human tissue for long time periods.

Researchers at the U.S. Department of Energy's Lawrence Livermore National Laboratory (LLNL) are making gains with thin-film flexible-polymer materials. In experiments with auditory prosthetics, neural interface micro-electrodes are embedded in polymer, allowing the device to move naturally and conform to live tissue. The polymer materials have mechanical properties that more closely mimic neural tissue than the micro wires used in current cochlear and deep-brain-stimulating implants.

"Among the engineering challenges associated with neural prosthetics is the biocompatibility of the implant," said Sarah Felix, a lead research engineer at LLNL and also a member of ASME. "Research suggests that polymer is more compatible with the human body than the silicon in conventional neural probes used in neuroscience studies."

Researchers believe conventional, rigid, neural devices cause micro tearing in human tissue because neural tissue is softer than the device. According to Felix, the flexibility of a thin-film polymer probe mitigates this problem. However, the flexibility also makes polymer devices difficult to implant. Felix's solution is to temporarily attach a rigid stiffener.

"For the polymer neural interfaces, we attach the device to a needle-like stiffener using bio-dissolvable polyethylene glycol (PEG) to enable extraction of the stiffener after surgical insertion," said Felix. "An innovative bonding process enables accurate alignment of the device to the stiffener."

A novel feature of the design is a shallow channel running lengthwise, which allows the even distribution of the PEG, or other bio-adhesive, during assembly and implantation. Felix's team used the method to implant unique, dual-sided, polymer electrode arrays into brain tissue, and these arrays successfully recorded neural signals.

The LLNL researchers believe their devices and surgical methods can also apply to future applications in deep-brain- and spinal-cord-stimulation, which will enable physicians to advance neural prosthetics to the next level of human health and rehabilitation. In fact, LLNL is currently developing neural implants that will restore auditory, motor and bladder function; aid speech; and control depression and epilepsy.

Each year, the U.S. National Institutes of Health (NIH) spends $6.5 million on neural prosthetics research and development, and today several of the most prestigious medical-research institutions in the United States — Case Western University and the Massachusetts Institute of Technology among them — are engaged in promising clinical studies.

Many medical scientists believe the sky is the limit for neural prosthetics, but ultimately it is the engineering community that will need to design and fabricate devices that enable the realization of the promise of neural modulation for patients. [Eternal Sunshine of the Bionic Mind: Prosthesis Could Restore Memory]

Said Felix: "There exist many engineering considerations with neural prosthetics, particularly in the interface of the device with human tissue. Engineers must think about a complete range of issues, from electrode materials and the lifetime of the implant to electronics and signal processing. This will be an intriguing pathway of multidisciplinary scientific and engineering development for many years to come."

This article was adapted from "Advances in Materials Engineering Will Drive Next Generation Neural Prosthetics" on ASME.org. The views expressed are those of the author and do not necessarily reflect the views of the publisher. This version of the article was originally published on Live Science.