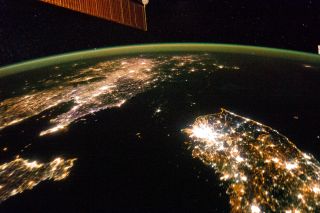 Nighttime imagery of the Earth's surface has been a staple for science geeks and geopolitical analysts for years, revealing details about a region's population, growth and industry in dramatic ways.

A recent image from the International Space Station (ISS) shows in stark detail the utter lack of development in North Korea — widely considered to be an isolated "rogue" state — compared with next-door neighbor South Korea, a rapidly developing industrial power.

"North Korea is almost completely dark compared to neighboring South Korea and China," according to the NASA Earth Observatory. In fact, the entire country appears so dark that it seems "as if it were a patch of water" instead of a nation of more than 24 million people. [7 Strange Cultural Facts About North Korea]

Virtually the only sign that the area is populated is a tiny glow emanating from the capital city of Pyongyang. Even so, "[t]he light emission from Pyongyang is equivalent to the smaller towns in South Korea," according to NASA.

South Korea and its capital city, Seoul, by contrast, appear to blaze with light and color in the nighttime image, taken Jan. 30.

Coastlines are commonly outlined clearly in nighttime images, as is shown in the heavily industrialized eastern shore of South Korea. The coast of North Korea, however, is almost invisible.

Despite global communication and trade, North Korea stands alone as an unusually isolated nation, where residents live under a familial dictatorship that frequently threatens attacks against South Korea and its ally, the United States. Amid this brinksmanship, North Korea remains remarkably shut off from the rest of the world. The Internet is almost completely inaccessible, with access only by permission and for government authorities. The few North Koreans with access to a computer can reach only Kwangmyong, a closed domestic network.

Until this year, reporters traveling to North Korea had to turn in their mobile phones at the border. In February 2013, the government enabled 3G access — but for foreigner visitors only.

Amid this pre-industrial level of technology, it's no surprise that North Koreans have little access to electricity: Per-capita power consumption throughout the regime was 739 kilowatt hours in 2011, according to the World Bank, compared with 10,162 kilowatt hours in South Korea.

These technological facts only hint at the grim reality of life in the isolated regime: Several reports from North Korea indicate that a handful of starving residents, where famine is an all-too-regular occurrence, may have resorted to cannibalism.

In the spring of 2012, a drought wreaked havoc on North Korea's crops. Following that disaster, a severe tropical cyclone hit the country, leaving an estimated 21,000 homeless.

As a result, the secretive pariah state was forced to accept food aid from South Korea for the first time in years, according to CNN.com. An estimated 10,000 people are reported to have died of hunger-related problems in recent years.