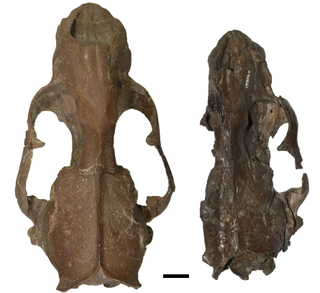 Skull of Enaliarctos emlongi, an early pinniped ancestor. Cullen examined and analysed the characteristics of this fossil for his study on the evolution of sexual dimorphism in pinnipeds.
(Image: © Thomas Cullen © Canadian Museum of Nature)

Male and female seals look quite different from each other, and now a study shows that climate changes that happened millions of years ago likely contributed to their differences.

Male seals tend to be much larger than females, and such differences in size and other characteristics — called sexual dimorphism — in pinnipeds such as Steller's sea lion and the northern fur seal dates back to about 27 million to 20 million years ago, the new study from Canada shows.

The climate changes that occurred at that time may have driven both the sexual dimorphism and changes in mating patterns characteristic of some pinnipeds, the researchers said. For instance, in the case of Steller's sea lion and the northern fur seal, one male usually mates with a group, or "harem," of females.

As a result of the changes in climate and ocean-circulation patterns, pinniped colonies gathered at the ocean sites that were richer in nutrients than other sites where nutrients were scarce, said Thomas Cullen, a Carleton University graduate and one of the researchers who worked on the study.

"Once they [the animals] are all in one place, there is more competition," Cullen told Live Science.

"We think that this environmental factor, this concentration of large numbers of pinnipeds into one area, pressured them into developing the harem mating system and sexual dimorphism," he said in a statement.

In the study, the researchers examined a skull fossil of an extinct pinniped species that was previously thought to belong to a juvenile. But when they compared it to the fossils of other species, and a modern species whose male and female members look different, they found that, in fact, the fossil was that of an adult female, of a sexually dimorphic species.

In most pinniped species that now live in the polar regions, males and females look similar, he said. Throughout their evolution, they have lived in nutrient-rich water, so they haven't experienced environmental pressure to form colonies near food sources.

But if water temperatures increase because of climate change, nutrient levels will likely decrease, which could put pressure on the seals to form colonies. The denser population of a colony causes greater competition for food, territory and mates. As a result, pinnipeds in those areas could exhibit harem mating behavior patterns and eventually evolve sexually-dimorphic traits, Cullen said.

The study was published on Feb. 19 in the journal Evolution.