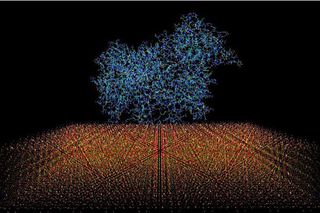 Geologists usually study the Earth, delving into processes such as earthquakes and volcanic eruptions or changes in the Earth over time. But a new breed of geologists is going beyond these traditional fields and rocking the connection between living organisms and earth materials.

Steven Lower and Eric Taylor are part of this new breed. While Taylor, now a professor at Kent State University, was a doctoral student in Lower's Ohio State University lab, the two embarked on a study to discover the molecular mechanism driving mesothelioma, an incurable form of cancer that affects the lung, chest cavity and the lining of the abdomen.

This aggressive cancer can develop when humans are exposed to asbestos, a term that refers to six naturally occurring silicate mineral fibers. To learn more about how these fibers may trigger cancer development, Taylor and Lower focused on crocidolite or blue asbestos, the deadliest of the fibers. Because crocidolite is long and thin, it can lodge among the lungs' mesothelial cells, which secrete lubricant to maintain the lung's slippery, protective coating. Unlike another asbestos fiber, chrysotile, which the lungs can flush out, crocidolite never dissolves and persists in the lungs for many years.

Through a series of experiments, the geologists tested whether crocidolite binds to epidermal growth factor receptor (EGFR), a protein receptor on the lung cell surface that initiates cell division. They found that crocidolite continually binds and unbinds with EGFR. When it does so, "crocidolite signals or triggers a potent response that may tell the cells to proliferate," says Lower. "This may help explain why cancer develops."

The geologists suspect that creating a small molecule that can coat crocidolite fibers may prevent the fibers from binding to EGFR, and thereby prevent the proliferation of cancer cells. Although the development of such a molecule probably is several years away, Taylor worked with chemist Roberto Lins at the Federal University of Pernambuco, Brazil, to develop supercomputer simulations to model the binding action of asbestos with EGFR. Understanding exactly how crocidolite attaches to EGFR could help the researchers tailor a molecule that would wedge between the two substances.

Lower and Taylor published their findings in Langmuir, and several more related papers are forthcoming. Lower is also pursuing similar work with carbon nanotubes. "They are very similar to asbestos, with their long, narrow shape, and a recent study suggests that nanotubes can trigger a similar pathogenic response as asbestos," he says. "There is some concern that nanotubes in manufacturing could be a cancer issue."