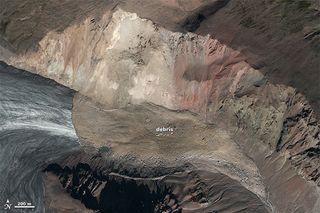 This landslide occurred in southeast Alaska in July, 2013. The newer landslide is thought to be even larger than this one.
(Image: © NASA Earth Observatory)

A massive landslide appears to have pummeled a remote region of southeast Alaska on Sunday (Feb. 16). If confirmed, it may be the largest natural landslide to have fallen anywhere since 2010, a blogger for the American Geophysical Union reported today (Feb. 20).

Geologists identified what they believe to be a landslide based on data from remote seismic instruments that detect the unique types of reverberations, or seismic waves, produced when rocks pound on the Earth during landslides. These reverberations are similar to those produced by classic earthquakes but are longer-waved, since landslides occur over a longer period of time than the nearly instantaneous tectonic slips that cause classic earthquakes.

The team has not yet collected satellite imagery of the region to confirm that the unique seismic readings do, indeed, represent a landslide, but expect to have this confirmation by sometime this weekend. Until then, the Columbia University geologists who detected the event are declining to reveal exactly where it took place, aside from saying that it is somewhere in southeast Alaska. [The 10 Biggest Earthquakes in History]

"We can be pretty sure that what we see in the wiggles is a real landslide, but we don't have a confirmation on the ground so I can't tell you for sure where it struck," Colin Stark, a geologist at Columbia University's Lamont-Doherty Earth Observatory, told Live Science.

Based on the data collected from the event, Stark and colleague Göran Ekström estimate that the landslide contained about 68 million metric tons of solid rock — equivalent in weight to about 40 million SUVs, Stark said.

If their estimates are correct, this would be the largest natural landslide since 2010, a year in which a massive landslide occurred in Pakistan and three swarmed together through the Himalayas. A sizeable slump also occurred at the Bingham Canyon copper mine in Utah last year, but that one was man-made.

Natural landslides of this large a scale generally consist of solid rock that gets pulverized into smaller stones through the duration of the violent event. The rocks start falling when they loosen from heavy rain, snowmelt or ground-thawing, and the resulting river of rock can travel at velocity of up to 656 feet (200 meters) per second, Stark said.

Stark and Ekström have been tracking massive landslides since 2010, and have found between three to 10 events around the world each year. A large portion of these have occurred in Alaska, Stark said, and several others have also occurred in similarly icy terrain, particularly during warm summers. For this reason, he believes that they tend to be triggered by ground-thawing, but has not yet confirmed this.

The researchers hope that by studying these remote massive landslides, they will be better able to understand the threats posed by landslides in more populated regions.

The researchers will resume their analysis of the presumed landslide once they confirm the event from satellite images, Stark said.