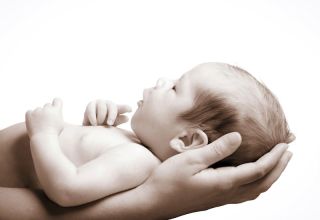 The infant mortality rate in the U.S. has fallen over time.
(Image: © Newborn photo via Shutterstock)

Having a Democratic president in the United States is linked with a reduction in infant mortality rates, according to a controversial new study.

They found that infant mortality declined significantly during that time, dropping 75 percent over the nearly 50-year period.

But when the researchers used statistical methods to focus on short-term changes during this time period, they found that infant mortality rates were about 3 percent higher during years in which a Republican was president, compared with the years in which a Democrat was president. [The 5 Strangest Presidential Elections in US History]

The findings held even after the researchers took into account factors that might affect infant mortality, such as unemployment rates, smoking rates, abortion rates and measures of national education and income level. And the researchers did not consider the first year of any president's term, they said, because a president's policies would not be expected to affect mortality in the first year of his presidency.

However, the researchers said they were "struck by the consistency of the association we have uncovered," according to the study published online in the International Journal of Epidemiology on Dec. 30, 2013.

If the findings are true, "the association could arise because of conditions existing for mothers and infants during Democratic vs Republican administrations," the researchers, from the University of Michigan, wrote in the study.

A political party in power may influence infant mortality rates because its ideology may promote the interests or well-being of different groups of people in the U.S., the researchers said in their study.

For example, "whether a government advocates austerity measures, or increasing social welfare protections as the response to economic crisis may reflect such ideological differences and influence mortality rates," they wrote.

Still, they noted that many factors influence population health, and that the president's party doesn't always affect legislation that is passed. Future research is needed to determine the reason for the link, they said.

Some experts were critical of the findings. In an editorial published after the study in the same journal, Ralph Catalano, a professor of public health at the University of California, Berkeley, said the statistical methods the researchers used in the study were not appropriate for the type of data they were analyzing. He said that analyzing the data a different way, using a conventional method that most in the field would use, showed no association between the U.S. president's party and infant mortality. (The method involved, in part, using infant mortality data from Canada, a population in which one would not expect to find the same link.)

"I, even as a Democrat who has served in political office, am not buying [the findings], and I doubt many serious epidemiologists will," Catalano wrote. (Catalano was a city councilman in Irvine, Calif. in the 1980s.)

But the researchers countered that they analyzed their data in several different ways. They also said the method Catalano suggested is not appropriate, according to their response to Catalano's editorial published on Feb. 7 in the same journal.

Catalano also said the premise of the study was problematic because the study does not look at how the president's party might be affecting infant mortality.

"You have to tell me what the connection is," Catalano told Live Science. "If they say it's changing healthcare, let's take a look and see." He added that this type of research is "about politics, its not about science."

The researchers stressed that studying the potential effects of social policies is within the realm of science, and does not imply a political bias.

"To the extent that human-made public, social and health policies and programs are powerful determinants of health, epidemiology is a social, and inherently political, science," they write in a counter-commentary. "It would be scientifically negligent to consider [the study of policy consequences] off-limits," they said.

Louise Flick, a professor of epidemiology at Saint Louis University in Missouri, who was not involved in the study, said that infant mortality is considered a very sensitive indicator of the general population's health "in that it is exquisitely responsive to poverty, maternal education, housing quality and other factors." However, "it is a surprise to me that there would be that much of a fluctuation in the relatively short period of a presidential term," Flick told Live Science.

Still, the link "fits with a lot of other research about the social determinants of health, and particularly about the impact of the income gap between the richest and the poorest members of a society," said Flick, whose own research focuses maternal and child health.

However, she noted that it may not be the president's party itself that affects infant mortality, but rather, something changing in society that leads to the election of a given president and contributes to a change in infant morality. "There could be forces changing in the country, either in attitudes of the population or economic circumstances, that lead to both a decline in [infant mortality] and the ease with which a democratic president could be elected," Flick said.

We should keep in mind that the U.S. has dropped steadily over the last 45 years in terms of its infant mortality ranking relative to other countries, Flick said. "So regardless of administration, we are not doing well," she said.

Live Science reached out to the study researchers, but they declined to comment for this article, saying they will issue a statement about the study next month.