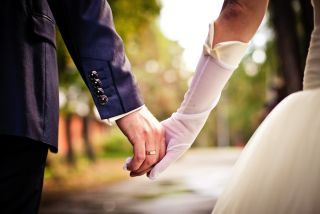 Marriage is a proxy for trust and commitment, which signals the brain that someone has your back, a new study finds.
(Image: © Shutterstock, Shutterstock)

Marriage is linked with numerous health benefits that simply cohabiting doesn't seem to provide. Now, research suggests the reason why — the brain links "just" living together with a lack of commitment and can't relax.

The new study used functional magnetic resonance imaging (fMRI) to examine the brains of cohabitating and married heterosexual couples, as well as same-sex couples, half of whom considered themselves married despite lacking legal recognition. The findings revealed that parts of the brain are less reactive to stress when somene is with a person they consider themselves married to.

"We really pay close attention to when it's safe to let down our guard and to outsource our stress response to our social networks," said study researcher Jim Coan, a psychologist at the University of Virginia. [I Don't: 5 Myths About Marriage]

The findings were unexpected, Coan added: "I'm sort of freaking myself out with this research."

In a study published in 2006, Coan had found that when threatened with a mildly painful electric shock, married women had a decreased brain response to the threat when holding their husband's hand versus a stranger's, or no hand at all.

The effect occurred in the hypothalamus, an almond-sized structure buried deep in the brain that helps regulate some of the body's responses to stress, including increased blood pressure.

The finding hinted at why marriage is linked with physical health, Coan said. But there were only 16 participants, all married women.

"We really needed to replicate the findings," he said.

In the new study, Coan and his colleagues not only replicated the findings, they expanded them. This time, they studied not only married couples, but also couples who were cohabiting. Most crucially, they were able to recruit 26 same-sex couples to participate in the experiment. [5 Myths About Gay People Debunked]

Gay marriage is not legal currently in Virginia, so none of the same-sex couples were married. However, half of the couples considered themselves married and described themselves as such to friends, family and acquaintances. The other half said they were just living together.

All of the couples went through the same experimental procedure: One person would lie in the fMRI scanner, where they could see a computer screen that cued them into a potential threat — a shock on the ankle. Some cues signaled a 20 percent chance that a shock was coming, and others signaled a 0 percent chance of shock.

During this process, the volunteers either held their partner's hands, a stranger's hands, or faced the shocks alone.

Again, the study found that when married couples held hands, the hypothalamus of the person threatened with the shock calmed down compared with when they held hands with a stranger or no one. Surprisingly, though, the same effect held true for same-sex couples who considered themselves married — even though they were not legally different than the same-sex couples who considered themselves to be cohabiting.

"There's a pretty strong and predictable regulation effect in the married couples and no regulation at all in the cohabiting couples," Coan said. "None, zero."

"When you're asserting, in the same-sex couples, 'We're just living together, we're only living together' it means you haven't really committed," Coan said. "It means that you're explicitly maintaining a little bit of emotional distance. You're not locked in. I think that's just enough to signal to your brain that you can't outsource your stress response to your partner."

In other words, people who hold back on commitment don't fully trust their partner has their back, the study suggests.

There may be benefits to cohabiting, Coan said — at the very least, it's cheaper for two adults to live together versus separately, which has its upsides. But the bar for emotional benefits seems to be higher, he said.

However, as the same-sex couples show, the marriage benefit may not be about the legal or religious recognition; rather, thinking of oneself as fully committed is key.

"Marriage is a proxy for trust and reliability," Coan said.

A cohabiting couple could recognize the benefits of marriage without the marriage license, Coan said, but it's less likely given that people who choose cohabitation over marriage are making the choice not to be locked in.

Marriage, Coan said, is "a socially understood sanctioned world that communicates to your partner commitment, really powerful, strong commitment, the kind of commitment that is hard to get out of. That's what your brain is looking for."

Coan will present the research today (Feb. 14) at the annual meeting of the Society for Personality and Social Psychology in Austin, Texas.