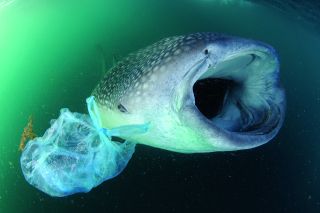 Pollution is a threat to marine life. As filter feeders, whale sharks are prone to gobble up plastic during their feeding sweeps.
(Image: © ©Thomas P. Peschak, Sharks and People (University of Chicago Press))

Plastic bags are the modern environmental scourge — piling up in landfills, polluting the oceans and choking wildlife. Now, Hawaii has taken a stand by becoming the first U.S. state to ban plastic bags at checkout counters.

Hawaii has always valued the land, or "Aina," so the step isn't too surprising. Four of the state's five counties have passed plastic bag bans (Hawaii's Kalawao County, the only outlier, is hardly populated), the Huffington Post reported. "Being a marine state, perhaps, we are exposed more directly to the impacts of plastic pollution and the damage it does to our environment," Robert Harris, director of the Sierra Club's Hawaii chapter, said in 2012, according to the Huffington Post.

While no other U.S. states have banned the omnipresent bags, several cities have. Los Angeles banned them at the beginning of 2014, and San Francisco and Santa Monica have bans as well. Portland, Ore., and Washington, D.C., have bans too. Coastal North Carolina enacted a ban, but suspended it indefinitely when a tornado hit a paper bag distribution center in 2011. Plastic bag bans also exist in some cities in England, Mexico, India, Myanmar, Bangladesh, Rwanda and Australia, according to HowStuffWorks. Others, including Italy, Belgium, Ireland, Switzerland and Germany, tax the bags or charge a fee for them. Taiwan banned them for three years before lifting the ban in 2006.