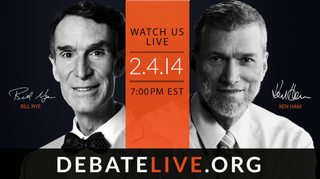 Bill Nye the Science Guy is set to defend evolution tonight (Feb. 4) in a debate with the founder of Kentucky's Creation Museum, Ken Ham.

The showdown, which will take place in front of 900 people at the Creation Museum, will be broadcast in a live stream starting at 7:00 p.m. EST. You can watch it here on Live Science. The stream will also be available on debatelive.org.

Ham and his organization Answers in Genesis promote a brand of "young Earth" creationism that rejects evolution and interprets everything in the Biblical book of Genesis as literal truth, like the claim that God created the universe in just six days a mere 6,000 years ago. (On the contrary, scientific evidence shows that our planet formed some 4.54 billion years ago and that the universe is 13.8 billion years old.) The Creation Museum even has exhibits showing the coexistence of humans and dinosaurs. [The Top 10 Intelligent Designs (or Creation Myths)]

Moderated by CNN's Tom Foreman, the debate will kick off with the question "Is creation a viable model of origins in today's modern scientific era?" and will entertain questions from the audience.

Many scientists and educators see debates with creationists as a losing battle, and some have questioned the wisdom of tonight's face-off. Josh Rosenau, of the National Center for Science Education (NCSE), said his organization has had a long-standing policy against debating creationists.

"Creationists are famous for using the 'Gish gallop' [named after creationist Duane Gish], a rapidfire repetition of supposed evidence against evolution and alleged support for their own claims, reeled off so fast that neither the audience nor the other debater can even keep track of all the claims, let alone refute them in the time allotted," Rosenau wrote on the NCSE's blog. "So there's no chance of the audience learning a lot of good science in a creationist debate, and every chance of it learning a lot of bad science."

Nonetheless, Rosenau wrote that he's optimistic tonight's event could be a "rare occasion when a debate isn't such a bad idea." He hopes that Nye — a longtime science educator who is perhaps most famous for his 1990s kids' TV show "Bill Nye the Science Guy" — can effectively take down the claims made in Ham's Creation Museum and show how believing in science connects to advances in everything from medicine to Mars exploration.

And Nye, who is the current CEO of the Planetary Society (a nonprofit co-founded by Carl Sagan), seems like he's up for the challenge. In a blog post on CNN, Nye wrote that he wants to draw attention to science education and implied that Ham's creation model is a threat to the future of science.

"We cannot use his model to predict the outcome of any experiment, design a tool, cure a disease or describe natural phenomena with mathematics," Nye wrote.

"These are all things that parents in the United States very much want their children to be able to do. … The facts and process of science have enabled the United States to lead the world in technology and provide good health for an unprecedented number of our citizens. Science fuels our economy. Without it, our economic engine will slow and eventually stop."