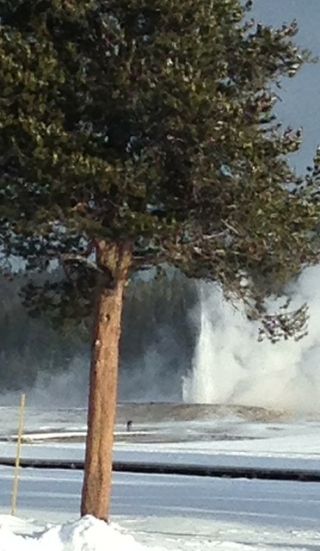 Giantess Geyser erupts on the morning of Jan. 30, 2014, after starting the day before. The photographer was about 600 yards away from the geyser.
(Image: © Bill Whetstone)

The usually quiet geyser is shooting off bursts of water that reach 50 feet (15 meters) into the air, said Annie Carlson, the supervisory park ranger at the Old Faithful Visitor Education Center. Giantess Geyser is nearby the more famous Old Faithful, but it is far less regular.

There are more than 500 geysers in Yellowstone. Geysers occur when geothermally heated water gets trapped and pressurized in underground hot springs. The recurrence rate of geyser eruptions varies wildly. Old Faithful erupts, on average, every 92 minutes, according to the National Park Service, though the exact timing varies between every 35 minutes and every 120 minutes. It shoots water 90 to 184 feet (27-55 m) into the air.

Yellowstone also boasts the world's tallest active geyser, the Steamboat Geyser. It has a major eruption only rarely, but when it does, the water rises as high as 300 feet (90 m).

Giantess is another infrequent erupter. It averages two to three episodes per year, with as many as 41 per year in the 1980s, Carlson said, but in recent years has slowed down, perhaps as a result of small earthquakes that continuously rearrange the underground plumbing of the park's geysers. The last time Giantess erupted was Sept. 13, 2011.

The pool around the geyser can surge before eruptions, giving a little notice, Carlson said. But yesterday (Jan. 29) afternoon, the weather in Yellowstone was snowy and windy, and no one was in the Upper Geyser Basin near Old Faithful watching the pool.

At about 2:55 p.m., rangers at the station near Old Faithful saw a plume of hot water rising from Giantess. They made an announcement so that several visitors were able to go watch the eruption despite the stormy conditions, Carlson said.

Giantess is still blowing off hot water as of this morning, she said. Previous eruptions have gone on intermittently for between one and 43 hours.

"It's definitely exciting for us here," Carlson said. "Giantess is a big geyser that does not erupt frequently."