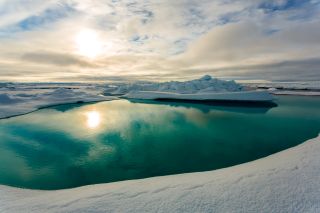 An emphatic five words spoken by President Obama last night during the State of the Union (SOTU) address were bittersweet for some climate scientists.

Scientists have known human-caused climate change is real, and while Obama has never said anything to the contrary, his declarative acknowledgement of the phenomenon is important.

"I applauded," after the remark, said Kevin Trenberth, a climate scientist at the independent National Center for Atmospheric Research (NCAR) in Boulder, Colo.

Others agreed, to a point.

"Almost immediately after he said that, I remarked on Twitter that it's a shame the president even *has* to say that. This fact was acknowledged 14 years ago in Bill Clinton's final SOTU address. Have we made so little progress in 14 years?" Pennsylvania State University climatologist Michael Mann told LiveScience in an email. "Nonetheless, I'm pleased that the president was willing to drive home this point in the face of an obstinate Congress, with a Republican leadership that still denies climate change even exists." [The Reality of Climate Change: 10 Myths Busted]

Though there is scientific consensus that humans have and are causing the planet to warm, some 23 percent of Americans are still skeptical of this fact, according to a November 2013 survey conducted by the Yale Project on Climate Change Communication. And most often Republicans say Earth's climate is not changing or that it is changing due to natural, not man-made, causes, according to a 2011 report by the University of New Hampshire's Carsey Institute.

In its latest report, out this past September, the Intergovernmental Panel on Climate Change pointed the finger directly at humans as the primary cause of climate change, saying it is "extremely likely" human activities have caused most of the warming of Earth's surface since the 1950s.

Obama's comments may not sway skeptics, but his words are critical nonetheless, experts say.

"It's always important when the President of the United States speaks about an issue, if for no other reason than putting it on the nation's agenda," said Anthony Leiserowitz, director of the Yale Project on Climate Change Communication. "The fact that he said it emphatically indicates that he remains committed to taking action, through executive action, if not with Congress."

The statement may have influenced the views of those individuals who trust the president, he added, though any effect will likely fade. (His research has found climate change disbelief is on the rise in the United States, with Americans who were once not sure if global warming was happening moving into the "it's not happening" category.)

"I don't think his statement alone will have much if any impact on public opinion or engagement with the issue. For most people it will soon be forgotten amidst the rest of the speech and the next news cycle," Leiserowitz told LiveScience. "The real question is what does he actually do during his remaining years in office?"

From the perspective of Leiserowitz and others, Congress is the sticking point for any action.

"Climate change is happening and it is caused by human activities. There is no doubt at all. By the time everyone believes this it will be far too late to do anything about it," said NCAR's Trenberth. "But the Congress is hopeless. There is no international framework, and progress is being eroded in Europe," he added, referring to last year's United Nations' talks on an international framework to combat climate change. In those talks, no real plan to cut global emissions was reached, according to the New York Times. [8 Ways Global Warming Is Already Changing the World]

The president still could move the ball forward regarding taking action to stem global warming, climate scientists and other experts say. For instance, Leiserowitz says Obama could send a bipartisan energy efficiency bill to Congress and possibly work on cooperation between the U.S. and China regarding a global climate treaty.

Carbon taxes, or fees attached to fossil fuels to account for the price they incur to society, for instance, are another such action.

"The framing of this issue matters. There are costs of climate change already in the tens of billions of dollars per year. The principle of 'user pays' should be invoked," Trenberth said. "That means establishing a price on carbon."