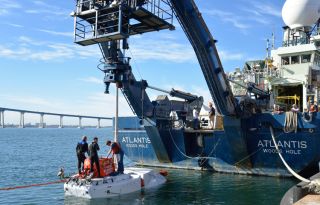 After undergoing a $41-million makeover over the past three years, the United States' deepest-diving manned submersible, Alvin, has been cleared to get back to work bringing scientists to the darkest parts of the ocean once again.

The newly upgraded Alvin was certified this month to dive up to 12,470 feet (3,800 meters) below the surface, according to the Woods Hole Oceanographic Institution (WHOI), which operates the Navy-owned sub. After additional tests, Alvin's operators hope the sub will be certified dive to 14,760 feet (4,500 m) later this year.

Alvin has been used in more than 4,600 dives in its 50-year history. Its most famous voyages include a 1996 survey of the Titanic shipwreck and a 1966 trip to locate a lost hydrogen bomb in the Mediterranean Sea. [Alvin's Makeover: Photos of the Famous Deep-Diving Sub ]

With its fresh certification, Alvin will embark on a "science verification" cruise in mid-March in the northern Gulf of Mexico, during which a team of researchers will assess the sub's performance as they explore and pick up samples around cold seeps and deep-water coral sites.

After that voyage, Alvin is slated to conduct three expeditions in the Gulf of Mexico, including an investigation into the impacts of the Deepwater Horizon oil spill. And during the second half of 2014, Alvin will be sent to the West Coast, where the sub is scheduled to explore deep ridges off shore, such as the East Pacific Rise.

Alvin, which was commissioned in 1964, has gone through several rounds of upgrades in its lifetime. Its latest makeover included a larger titanium hull with five instead of three viewports; new power-saving LED lights to illuminate a greater area of the ocean; a larger science "basket" that can carry up to 400 lbs. (181 kilograms) of cargo; and a lateral thruster that allows it to "hover like an underwater helicopter," Pat Hickey, Alvin manager and one of the chief test pilots, explained in a statement.

Rob Munier, WHOI vice president for marine facilities and operations, added that the Navy's certification helps Alvin "get back to its critical mission of taking scientists to the deep sea."

Another phase of upgrades (which, for now, are contingent on funding and improvements to lithium-ion battery technology) would allow Alvin to dive up to 21,325 feet (6,500 m) below the ocean's surface. At that depth, the sub will gain access to 98 percent of the ocean, Alvin's upgrade project leader at WHOI, Susan Humphris, told LiveScience last year.