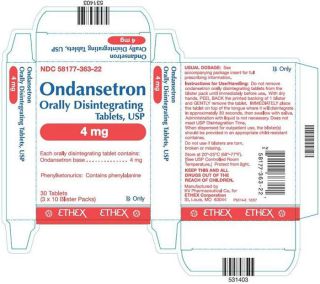 Zofran is the brand name for ondansetron, a prescription medication that is used to prevent nausea and vomiting. It is most often prescribed for cancer patients as a way to help prevent the nausea caused by chemotherapy, radiation and surgery. It is sometimes prescribed for pregnant women dealing with morning sickness.

Zofran is a serotonin 5-HT3 receptor antagonist that works by blocking serotonin’s function, which can cause nausea and vomiting.

"When chemotherapy is administered, it can release serotonin from various structures," including the stomach, intestine and brain, said Dr. Nagashree Seetharamu, an oncologist at the North Shore Long Island Jewish Cancer Institute at Lake Success in New York. When serotonin is released, it can initiate a vomiting reflex.

"By interfering with that process, Zofran can prevent this," she said.

Zofran is available as an oral tablet, rapidly disintegrating tablet (ODT), as a liquid and occasionally given via injection. The first dose is usually taken 30 minutes before chemotherapy begins, one to two hours before radiation begins, or one hour before surgery begins. Sometimes, patients take additional doses one-to-three times a day during chemotherapy or radiation and for one or two days after finishing treatment.

Zofran can be taken with or without food, and patients can continue their normal diet while taking Zofran. Patients should limit alcohol consumption.

Zofran ODT is an oral rapidly disintegrating tablet that dissolves quickly on the tongue.

It's important that Zofran can rapidly disintegrate on the tongue. Some cancer patients have difficulty swallowing pills, and it's not always convenient for them to come into a medical center to receive injections, Seetharamu said.

Those taking rapidly disintegrating tablets should be careful in how they remove the tablet from the package. It is important to not push the tablet foil backing, but to use dry hands to peel back the foil backing. Remove the tablet gently and immediately place it on the top of the tongue. The tablet will then dissolve in a few seconds. It can be swallowed with saliva. Taking Zofran ODT with water may increase the risk of a headache.

There are some side effects associated with Zofran. The National Institutes of Health lists the following as common side effects. If experienced severely or for a prolonged amount of time, a doctor should be consulted:

The following are more serious side effects. If experienced, patients should consult their doctors immediately:

People taking antidepressants or other medications that involved with serotonin should not take Zofran. Mixing these medications can result in serotonin syndrome, which happens when large amounts of serotonin accumulate in the body. Symptoms range from shivering and diarrhea to muscle rigidity, fever and seizures, according to Seetharamu and the Mayo Clinic.

Symptoms of overdose from Zofran are:

Those who suspect Zofran overdose should call emergency services or poison control immediately.

Though Zofran is often effective in curbing pregnant women’s nausea or vomiting, the safety of the drug for the fetus is still under study. A January 2012 study looked at more than 4,500 women who experienced nausea and vomiting during pregnancy and more than 5,800 controls. The researchers found that taking ondansetron during the first trimester of pregnancy was associated with a twofold risk of birth defects, such as a cleft lip or palate, compared with women who didn't take the medication.

However, a February 2013 study found no significant risk of adverse fetal outcomes among mothers taking Zofran. In 2013, the FDA announced a potential safety issue for mothers taking Zofran, though was careful to note that, “listing of a drug and a potential safety issue … does not mean that FDA is suggesting prescribers should not prescribe the drug or that patients taking the drug should stop taking the medication.”

It is unknown whether Zofran transfers into breast milk. Pregnant women with questions about Zofran should talk to their doctors.