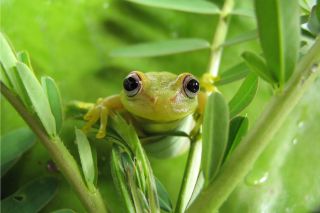 Michael Reuter is The Nature Conservancy's director of freshwater for North America and has focused his career on the management of large freshwater systems for both people and nature. This Op-Ed was adapted from a post to the Great Rivers Partnership website. He contributed this article to LiveScience's Expert Voices: Op-Ed & Insights.

Food. Water. Energy. All situated within some of the most beautiful, productive and diverse ecosystems on the planet.

Few places have what Brazil has.

It's an abundance that comes with great responsibility. Because from now on, billions of people globally — perhaps nine billion by 2050 — will look to Brazil, whether they know it or not, for essential goods and services. Management of the country's water resources will truly impact us all, a nós todos!

That's something a lot of Brazilians are debating these days. Indeed, a sense of frustration streamed through the Brazilian Water Resources Forum in Bento Gonzales this past November. More than a thousand leading water professionals gathered there to share ideas, and at times, challenge each other's thinking about how to best work through impasses to smart development and balance demands on the nation's substantial water resources.

A particularly lively session focused on the Tapajós River— a tributary of the Amazon about the size of the Ohio River in the United States. While rich with resources and opportunity, the Tapajós faces competing needs and conflicting visions about energy, transportation, mining, conservation and more. One participant compared the Tapajós's section of the Amazon River Basin to a dog that starves because it has too many owners. Another likened management of the great waterway to owning a powerful computer that has no software — abundant in resources, but unable to make a decision!

Moving in the right direction

Realizing balance and progress at this scale is hard. It's so hard that it's near impossible to find decent examples from elsewhere around the world.

It requires putting roads, ports and waterways, hydropower dams, railroads and other infrastructure in the right places, with the right technology. These places need to be prepared to absorb the negative impacts of development that come along with the many benefits for nature and people.

For example, railroads, ports and waterways encourage agricultural development in some areas over others by providing substantial economic efficiencies. But they also drive consequences, such as sacrificing Brazil's unique rainforests and savannas and other ecological systems that sustain people with clean water and fisheries. Shortsighted or poorly planned development may even undermine itself as these agricultural supply chains are boycotted in international markets.

Many organizations in Brazil, including The Nature Conservancy, are focusing on "getting it right" in the Tapajós River Basin. The Tapajós flows north through the fast-developing agricultural region of Mato Grosso and Pará, and then winds through some of the most pristine rainforests before joining the Amazon at Santarém.

Protests levied against the first port facility at Santarém led the conservancy to the Tapajós a decade ago to forge a partnership with Cargill in an effort to ensure that all soybeans purchased met rigorous standards for sustainability. This partnership influenced the new Brazilian Forest Code, an attempt to reconcile agriculture and conservation. Also, it spurred creation of a new land-use management mechanism named Cadastro Ambiental Rural (Rural Environmental Registry), which allows Brazil to manage how private landowners use and maintain forests.

Now the Tapajós River faces a massive expansion of the land and water transportation network needed to move all those agricultural products across the world. At the same time, it is targeted for large-scale hydropower development as part of Brazil's overall energy plans (85 percent of the country's energy comes from hydropower).

Brazilians at the wheel

So who has the know-how to integrate all these needs and make the wise decisions that will change the world?

Not one or two, but many of them working together — each bringing their personal values and perspectives into a joint decision-making process that is supported by goodwill and biased toward action. National-level decision makers will need to break out of their sector silos, and work to support integrated decisions on energy, transportation, conservation and more. There is also a need for crossing these borders into a watershed-based approach.

Of course, without goodwill or trust, such diverse perspectives can be disabling. Many of us in the United States have had a good dose of that lately. Given the complexity and scientific uncertainty that abound in great rivers like the Tapajós, stakeholders won't even be able to agree on the questions to ask, much less use the same science or settle on the same answers, if they don't develop mutual respect and trust.

But with trust present, a collective voice can make more progress possible. By staying in the game, Brazilians have every potential to realize the incredible creativity and innovation that flows from having diverse perspectives present when solving grand dilemmas. And they can look to others for help, because the world needs Brazil.

So what's really possible when people focus on shared solutions and shared value?

Well, for one, hydropower development can be much more compatible with other river resources. This has been illustrated by efforts such as the re-engineering of the dams along the Penobscot River in Maine. There, citizens realized dramatic increases in habitat for salmon and other migratory fish while maintaining or increasing energy generation. The key is to move hydropower planning and operation away from a focus on single dams and toward a whole river basin or region.

Brazilians can do this. And if they embrace all stakeholders in the process, they will likely get smarter and more lasting solutions. So, por favor, Brasil, stay in the game. Keep debating, and you just might change the world.