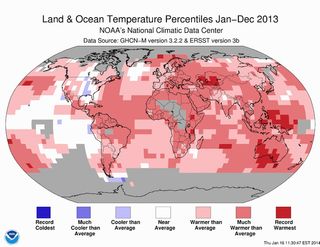 In 2013, most parts of the world saw above-average annual temperatures.
(Image: © NOAA)

It's official: 2013 was one of the hottest years on record for the planet, tying 2003 as the world's fourth warmest year since record keeping began in 1880, a new analysis shows.

In 2013, the combined global land and ocean surface temperature was 1.12 degrees Fahrenheit (0.62 degrees Celsius) above the 20th century average of 57 F (13.9 C), according to the annual climate report released by the U.S. National Oceanic and Atmospheric Administration (NOAA).

In a separate analysis, scientists at NASA came up with slightly different results, finding that the global temperature from 2013 tied with 2009 and 2006 for the seventh warmest year on record. The two agencies use "slightly different methods, but overall, their trends show close agreement," a statement from NASA noted. [Video: Watch 60 Years of Rising Temperatures]

Climate data from the past 134 years reveal a long-term trend of global warming. Climate scientists attribute the bulk of this warming to the buildup of greenhouse gases, such as carbon dioxide, in the atmosphere due to emissions from industry, power and transportation. The level of carbon dioxide in Earth's atmosphere, which hit 400 parts per million in 2013, is now higher than at any time in the last 800,000 years, according to NASA. (Parts per million denotes the volume of a gas in the air; in this case, of every one million air molecules, 400 are carbon dioxide.)

"Long-term trends in surface temperatures are unusual and 2013 adds to the evidence for ongoing climate change," climatologist Gavin Schmidt, of NASA's Goddard Institute for Space Studies said in a statement. "While one year or one season can be affected by random weather events, this analysis shows the necessity for continued, long-term monitoring."

Temperatures around the world have climbed an average of 0.11 degrees Fahrenheit (0.06 degrees Celsius) each decade since 1880, but they've risen even more significantly since the 1970s — at a rate of 0.28 degrees Fahrenheit (0.16 degrees Celsius) per decade, according to NOAA. Last year marked the 37th year in a row that the global average temperature was higher than the 20th century average, and the 15 hottest years on record include all 13 thus far in the 21st century (2000-2013).

Most parts of the planet experienced above-average annual temperatures in 2013, NOAA officials said. Last year saw a surprisingly warm start to winter in Russia, heat waves in Australia that contributed to the continent's warmest year, and hot temperatures in Argentina that added to the nation's second warmest year since records began in 1961. Japan also experienced its hottest summer on record, Austria recorded its first temperature above 104 degrees F (40 degrees C) amid a hot summer, and Reykjavik, the capital of Iceland, saw its warmest January since 1987.

Not every region experienced above-average warmth in 2013. The Netherlands, for example, saw its coolest spring in more than four decades, and Russia recorded its coldest March in the past 50 years, with temperatures plummeting as much as 18 degrees F (10 degrees C) below average in some areas. Nonetheless, no part of the world recorded its coolest annual temperature last year, according to NOAA.

NASA scientists emphasized that short-term weather patterns will always cause fluctuations in average temperatures from one year to the next. In other words, the long-term trend of global warming doesn't mean each new year will be warmer than the last. But climate scientists now anticipate each successive decade will be warmer than the last because of the high level of greenhouse gases in the atmosphere, according to NASA.