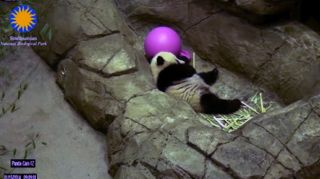 Visitors to the Smithsonian's National Zoo in Washington, D.C., can finally get a glimpse of the panda cub Bao Bao.

The baby bear made her public debut on Saturday (Jan. 18). Panda fans started gathering before dawn in anticipation of seeing the 5-month-old bear, who slept through much of her debut, according to The Washington Post.

The zoo extended visiting hours at its panda house from 8 a.m. to 4:30 p.m. through Monday (Jan. 20) and is admitting visitors into the facility in small groups to accommodate crowds over the holiday weekend. If you can't make it to Washington, D.C., there's always the panda cam.

Bao Bao, whose name means "precious" or "treasure" in Mandarin, was born on Aug. 23, 2013 to the 15-year-old panda Mei Xiang. The cub is one of more than 300 pandas living in captivity worldwide, most of them in China. The only other zoo in the United States that currently has newborn pandas on exhibit is Zoo Atlanta, where female twins were born in July.

Bao Bao was conceived by artificial insemination, using sperm from the zoo's adult male Tian Tian. Mei Xiang and Tian Tian are the parents of one other surviving cub, Tai Shan, who was born in 2005 and was moved to China in 2010. Zoo officials said Bao Bao, too, will be moved to China after four years.

It's estimated that there are as few as 1,600 pandas living their natural habitat — mountainous bamboo forests in China — and they face threats like habitat destruction and fragmentation. Many conservationists maintain that captive breeding is a good way to study and preserve the rare bears.