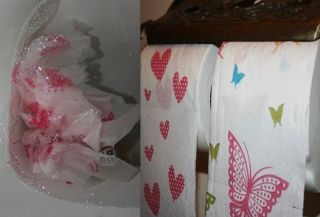 Paper that is decorated with pictures or designs that include red ink could look bloody when wet, and traces of red blood in the toilet are one of the most common signs of colon cancer, colorectal surgeon Dr. Guy Nash of Poole Hospital, in England, wrote in a letter published Jan. 15 in the journal BMJ Case Reports.

Colon cancer, or colorectal cancer, develops in the cells that line the large intestine (colon) or rectum. The condition caused about 50,000 deaths in the United States in 2013, according to the National Cancer Institute, and many people suffer few symptoms early on. [10 Do's and Don'ts to Reduce Your Risk of Cancer]

Nash said he saw what looked like blood in his own toilet, but it turned out to be red hearts adorning the bathroom tissue. He said manufacturers and the public should be aware of this risk.

"In my view, it is irresponsible of the makers to have not considered this," Nash told LiveScience in an email, adding that inks of other colors would not create this difficulty.

Not all medical professionals view it as a concern, however.

"I think it's nonsense," said Dr. David Bernstein, a gastroenterologist at North Shore University Hospital in Manhasset, N.Y. Bernstein said he has never seen a patient who confused colored toilet paper with signs of colon cancer.

"If someone sees blood, they should call their doctor, not panic, and have it appropriately evaluated," Nash said. He also said healthy people should have regular colonoscopies, which are widely recommended as a screening tool for colorectal cancer.

And red toilet paper isn't the only thing people may mistake for blood. Nash said some of his patients report bleeding that turns out to be beetroot eaten three days earlier.