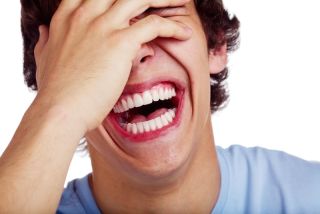 Teenagers who thought it would be funny to fake being gay may have skewed the results of a landmark 1990s adolescent health survey, a new research paper argues.

The article, published online Dec. 24 in the journal Archives of Sexual Behavior, says that the 5 to 7 percent of teens who identified as homosexual or bisexual in that survey is likely a huge overestimate — caused by teens who responded in jest or who misunderstood the questions.

"We need to be careful when we do our research that our sexual-minority participants are representative of the gay youth population so that we can accurately and adequately represent their lives," study co-author Ritch Savin-Williams, a human development researcher at Cornell University, said in a statement. [Teen Angst: 10 Surprising Facts About The Adolescent Brain]

So researchers using this data should adjust for the potential problem, the researchers wrote in their paper.

The National Longitudinal Study of Adolescent Health survey, colloquially known as Add Health, asked 14,000 teenagers detailed questions about their health, well-being and other behaviors in four waves from 1994 to 2008.

But when the results for the first wave came out in the 1990s, researchers were shocked. Whereas just 1 percent of teens had identified as homosexual or bisexual previously, Add Health found dramatically higher results.

Even stranger, about 70 percent of the teens initially identifying as gay, lesbian or bisexual said they were straight in later versions of the survey.

A likelier scenario is the "immature jokes" hypothesis, Savin-Williams argues: Namely, that the teens thought it would be funny if they told researchers they were homosexual or bisexual.

Other signs suggest the teens were having a joke at the expense of the surveyors.

"We should have known something was amiss," Savin-Williams said. "One clue was that most of the kids who first claimed to have artificial limbs (in the physical-health assessment) miraculously regrew arms and legs when researchers came back to interview them."

Adding credence to that idea, most of the people who later revised their sexuality were boys, who seem likelier culprits for pulling a joke, the researchers say.

It's also possible that the vague wording of the questions asked, such as "Have you ever had a romantic attraction to a male?" confused a lot of teens, and that when follow-up surveys asked more straightforward questions about sexual orientation, teens answered honestly.

For instance, the Add Health survey may have contributed to the notion that gay teens are more suicidal, depressed or deal with more mental illness, according to a statement about the research.