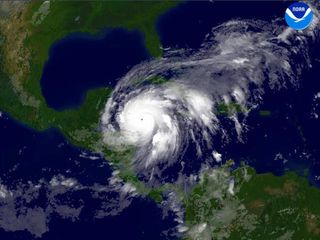 Hurricane Wilma on Wednesday, Oct. 19 as it became the most intense hurricane ever measured in the Atlantic Basin.
(Image: © NOAA)

In a season that has included three Category 5 hurricanes for the first time on record in the Atlantic Basin, scientists are beginning to wonder if their rating system is adequate, Live Science has learned.

On the Saffir-Simpson hurricane scale, there is no Category 6. But Hurricane Wilma this week brushed up against where a 6 would be if the scale were logically extrapolated to include another category.

And hurricanes are getting stronger, apparently fueled by global warming. Researchers expect that trend to continue.

Kerry Emanuel, a climatologist at the Massachusetts Institute of Technology, calls the Saffir-Simpson scale irrational, in part because it deals only with wind. "I think the whole category system needs serious rethinking," Emanuel told LiveScience.

But in a telephone interview, the 88-year-old co-creator of the scale, Herbert Saffir, defended it as simple and useful for the public.

"As simple as it is, I like the scale," Saffir said today. "I don't like to see it too complex."

The history of the scale

In 1967, the United Nations commissioned Saffir, a Florida consultant engineer, to study low-cost housing in regions of the world that were prone to tropical cyclones and hurricanes.

Saffir realized there was no way to describe the effects of a hurricane, so he developed his own five-category scale. Later, Robert Simpson, then director of the National Hurricane Center, modified Saffir's work, adding measurements for flooding and storm surge.

The result was the Saffir-Simpson Hurricane Rating scale.

A Category 1 storm begins at 74 mph and a Category 5 at 156 mph. On average, there is about a 20 mph increment in wind speed between the categories.

An extrapolation suggests that if a Category 6 were there, it would be in the range of 176-196 mph. Hurricane Wilma, which had maximum recorded wind speeds of 175 mph, would have been on the verge of breaking into this hypothetical new category.

The scale didn't include a Category 6 for two reasons.

First, it was designed to measure the amount of damage inflicted by a hurricane's winds, and beyond 156 mph, the damage begins to look about the same, according to Simpson.

"When you get up into winds in excess of 155 mph you have enough damage," Simpson said in a 1999 interview with the National Weather Log, a publication of the National Oceanic and Atmospheric Administration.

"If that extreme wind sustains itself for as much as six seconds on a building it's going to cause rupturing damages that are serious no matter how well it's engineered. So I think that it's immaterial what will happen with winds stronger than 156 miles per hour. That's the reason why we didn't try to go any higher than that," Simpson said.

Another reason is that Category 5 hurricanes are relatively rare, or at least they used to be.

"In general, I didn't expect that there would be too many hurricanes that went [above] 155 miles per hour for sustained winds," Saffir said. "The limit seems to be about 175 miles per hour and I don't know of anything that goes much over that."

Some scientists predict, however, that the intensity of hurricanes and their maximum wind speeds may be increasing and that Category 4 and 5 storms will become more common in the years to come.

Ocean and atmospheric temperatures work together to determine the maximum wind speed attainable. This value is known as the "maximum potential hurricane intensity" and is calculated using a formula developed in 1998 by Emanuel, the MIT climatologist.

Based on ocean and atmospheric conditions on Earth nowadays, the estimated maximum potential for hurricanes is about 190 mph.

This upper limit is not absolute, however. It can change as a result of changes in climate. Scientists predict that as global warming continues, the maximum potential hurricane intensity will go up. They disagree, however, on what the increase will be.

Emanuel and other scientists have predicted that wind speeds—including maximum wind speeds—should increase about 5 percent for every 1 degree Celsius increase in tropical ocean temperatures.

Chris Landsea, a meteorologist at the National Hurricane Center, disagrees.

Landsea believes that even in the worst-case global warming scenarios, where global temperatures ratchet up by an additional 1-6 degrees Celsius, there would be about a 5 percent change, total, by the end of the 21st Century. That means that hurricane-force winds are unlikely to exceed 200 mph, Landsea said.

The fastest "regular" wind that's widely agreed upon was 231 mph, recorded at Mount Washington, New Hampshire, on April 12, 1934. During a May 1999 tornado in Oklahoma, researchers clocked the wind at 318 mph.

Time for a new scale?

Some scientists believe that the Saffir-Simpson scale is too simplistic and that it should either be extended or replaced.

"A rational scale would have equal increments of either the wind speed squared or the wind speed cubed," Emanuel said today. "There's nothing like that [with the Saffir-Simpson scale], it's all over the place. I think it will ultimately be revised."

Other critics have pointed out that the Saffir-Simpson scale doesn't take into account a hurricane's size or the amount of rainfall.

The rains associated with some hurricanes can lead to flooding that causes just as much or more death and damage than wind.

A hurricane's size can also make a large difference in the amount of damage it inflicts. Hurricane Katrina, which was a Category 5 storm before weakening prior to landfall, caused much more damage than Camille—another Category 5 hurricane that struck in 1969. Katrina was a much larger. Katrina's hurricane-force winds extended 105 miles from its center while Camille's only extended 60 miles out.

Emanuel says a new hurricane rating system will need to have at least three numbers, describing not only wind speed, but also rainfall and storm size.

"It will also be continuous, so you can have a category 4.6 or 4.7, and it will be open-ended, so that the categories just keep going up," Emanuel said.

Adding too many variables into a rating system would make it too complex, Saffir said. Part of the reason that the Saffir-Simpson scale has lasted so long is because it is easy for the public to grasp.

"Every hurricane is different," Saffir said today, "so you really couldn't categorize every type of hurricane as far as size and extent. As far as rainfall goes, we already have a scale for rainfall; it's measured in inches and I think that's really all that's needed."

But some critics argue that the simplicity of the scale often comes at the price of accuracy.

A new hurricane rating system might indeed become too complex for the public to easily understand, but in a way, the public doesn't have to understand it, Emanuel said.

"If you just think about it, the public's not directly involved in the decision to evacuate based on weather forecasts. In the case of Katrina, the mayor of New Orleans said, 'Get out.' It's important that the mayor and his associates or emergency managers understand the three numbers, but it's not so important that the public does."