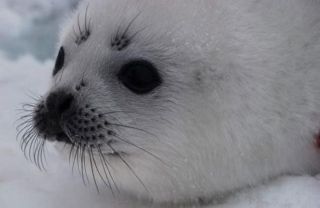 Wayne Pacelle is the president and chief executive officer of The Humane Society of the United States (HSUS). This Op-Ed is adapted from several posts on the blog A Humane Nation, where the content ran before appearing in LiveScience's Expert Voices: Op-Ed & Insights.

As 2014 begins, there is encouraging news to report on efforts to protect seals.

Because of Humane Society International (HSI)'s work to close markets for seal products, prices for seal fur in Canada have declined dramatically. As a result, in 2013 Canadian hunters fell shy of their allowable quota of seals by more than 300,000 individuals.

And, a World Trade Organization (WTO) panel upheld the European Union's right to prohibit the trade in seal products for animal-welfare reasons, a ban secured by HSI and our partners in 2009. This sets a crucial precedent not only for other countries considering seal-product trade bans, but also for animal welfare in general as it pertains to global trade: This is the first time the WTO has ruled that animal welfare is an issue of public moral concern and is a legitimate reason to restrict trade.

HSI provided key evidence in support of the EU ban, submitted an amicus (friend of the court) brief to the WTO panel, and our video evidence of cruelty in recent seal slaughters was broadcast during the WTO hearings.

The European Court of Justice, the highest court in Europe, also rejected an appeal by commercial sealing representatives of an earlier ruling by the European General Court. That decision left intact the right of the EU to ban seal-product trade — a move that aligns with the views of the 86 percent of Canadians who oppose the commercial seal hunt.

All of these victories represent a seismic shift on the international legal front for animals. Unknown to most Americans, the WTO in Geneva sets the rules-of-the-road on trade matters and regularly renders far-reaching decisions that affect the ability of nations to pass laws to protect animals, the environment and public health — long treating such value-based standards as barriers to trade. This little-understood international body has the power to judge which domestic laws protecting animals are consistent with free-trade agreements, and which laws cannot stand. It's a staggering amount of power for one body to wield over the fate of millions of animals, and that's why HSI and The HSUS have developed a premier team of political and legal experts who work tirelessly to push the WTO toward humane decisions.

Their recent ruling is its most animal-friendly decision to date. The EU ban on the sale of seal products, instituted in 2009, had been challenged at the WTO by Canada and Norway as violating international trade rules. In essence, the pro-sealing countries argued that animal cruelty is not a sufficient reason to ban the trade in seal products. The WTO panel largely rejected their claims of discriminatory treatment, finding fault merely with certain exceptions to the ban.

While the truth of these statements may seem obvious, it is hard to overstate the importance of their acceptance on a global legal stage. Seen more narrowly, this is a great win for seals and a huge setback for the government of Canada in its efforts to turn back the clock on sales of seal pelts to the EU.

This ruling will reassure any country considering an animal-welfare measure that it has much less to fear from a WTO challenge than it did before. It also improves the outlook for hundreds of state and federal animal-protection laws that had an uncertain future because of the consequences of unfettered trade.

This win for animals comes on the heels of much more troubling WTO ruling last year, holding that the U.S. "dolphin-safe" labeling law provides "less favorable treatment" to Mexican tuna products in violation of international trade rules. In the wake of that ruling, the administration of U.S. president Barack Obama had a choice to make: It could relax the law's requirements with respect to setting tuna nets on dolphins, which would be sure to please the Mexican tuna fisheries stubbornly clinging to this antiquated practice, or it could expand the scope of the dolphin-safe law in order to comply with the WTO report, while leaving intact a strong prohibition on setting nets on dolphins.

Fortunately, the administration chose the latter, and conservationists rejoiced on behalf of the dolphins.

Unfortunately, Mexico recently requested another hearing at the WTO, claiming that the dolphin-safe law still runs afoul of WTO principles. Much like Canada, Mexico continues to try to profit from cruel practices that are out-of-touch with modern sensibility and push the products of this cruelty into markets that don't want them.

In the meantime, HSUS lawyers and policy experts were hard at work at the recent WTO Ministerial Conference, and will be into the future, making sure free-trade principles do not run roughshod over the patchwork of domestic humane regulations, which are the only thing standing between millions of animals and a whole panoply of unspeakable cruelty and abuse in the more than 150 member countries that make up the WTO.

However, despite all of these accomplishments, I remain dismayed by the public comments made recently by celebrity chef and television personality Anthony Bourdain, who criticized our Canadian seafood boycott and said, "I'm all for protecting seals, but a total ban dooms the indigenous people above [the] Arctic Circle to death or relocation." He called out dozens of chefs who've joined HSUS's Protect Seals campaign, and urged them to withdraw their support.

Bourdain could not be more wrong. He's conflated the much smaller-scale subsistence hunting of seals in other parts of Canada, which is conducted by Inuit people, with the immense commercial slaughter of seals for their fur pelts in Atlantic Canada, which is conducted almost entirely by off-season fishermen who kill the seals, take their pelts, and then dump their carcasses in the ocean or leave them to rot. They attempt to sell the pelts to dealers who then peddle them on the international market. Few of these seal products are used locally in the maritime provinces of Canada where the hunt occurs.

Canada's commercial seal hunt has claimed the lives of more than 2 million seals since 2002 alone, making it the largest slaughter of marine mammals on Earth. The government of Canada's kill reports confirm 98 percent of the seals killed are younger than 3-months-old. Every year, The HSUS documents the slaughter and comes back with video evidence of seals thrashing in pain due to inaccurate bullet wounds — often disappearing under the sea ice to die slowly without ever being recovered — and fishermen impaling still-conscious seal pups with boat hooks and dragging them on board their vessels to be clubbed and skinned.

No amount of income derived from the hunt could justify this mass killing and cruelty. But what's remarkable is that the whole enterprise is a financial boondoggle, enabled almost entirely and unwittingly by Canadian taxpayers.

During the last couple of years, the landed value of the pelts obtained by the hunters is just north of $1 million a year. The government provides subsidies — including financing private companies to buy up pelts — that amount to millions. So the entire enterprise is a money-loser for Canada.

The Canadian government can turn into a savior, not an enabler, by conducting a buy-out of sealing licenses — a measure that The HSUS fully endorses. This simple plan would see the federal government end commercial sealing, compensate fishermen for any lost income, and invest in sustainable economic alternatives.

The fact is, there aren't many people in the world who want those seal pelts. The European Union bans their sale, and so do the Customs Union of Russia, Belarus and Kazakhstan; the United States; Mexico; and Taiwan. The markets for seal pelts have been shrinking and closing because good people throughout the world no longer want to be associated with the cruelty of the seal hunts.

That goes for consumers, and for chefs. In fact, an army of chefs, along with 800,000 individuals and 6,500 businesses, are part of the Protect Seals boycott of Canadian seafood. The HSUS is grateful to every one of them for their leadership and their decency, and we'll continue with our efforts to expose the cruelty of the hunt, to close markets for these seal pelts, and to urge consumers to boycott Canadian seafood, until the fishing industry does the right thing and calls for the end to the commercial seal slaughter.

Pacelle's most recent Op-Ed was "One Chimpanzee's Life is a Testament to Humanity" This article was adapted from several posts that first appeared on the HSUS blog A Humane Nation. The views expressed are those of the author and do not necessarily reflect the views of the publisher. This version of the article was originally published on LiveScience.