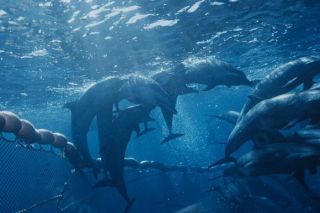 Zak Smith is an attorney for the Marine Mammal Protection Project at NRDC. This Op-Ed is adapted from one that first appeared on the NRDC blog Switchboard. Smith contributed this article to LiveScience's Expert Voices: Op-Ed & Insights.

Around the world, more than 650,000 whales, dolphins, sea lions and other marine mammals are killed or seriously injured every year after getting trapped, entangled, or hooked in commercial fishing gear.

While U.S. fishers — and foreign fishers exporting to the United States — are required to comply with the Marine Mammal Protection Act to reduce that unintended "bycatch" of marine mammals, authorities in the United States have only enforced the law against U.S. fishers, letting most foreign fishers off the hook. After 40 years, the National Marine Fisheries Service indicates it is finally moving to require that imported seafood meets U.S. standards for marine mammal bycatch.

A new report from NRDC that I helped write, Net Loss: The Killing of Marine Mammals in Foreign Fisheries, details what the U.S. government needs to do to enforce the law, and in doing so, how it will be throwing a life preserver to thousands of marine mammals around the globe, potentially helping some populations avoid extinction.

Americans imported nearly $17 billion of edible seafood in 2012 — weighing 2.4 million metric tons. NRDC's report finds that 91 percent of seafood consumed in the United States is imported, and nearly every wild-caught foreign fish product sold in the United States violates the MMPA — increasing the risk of extinction for many marine mammal populations.

Here's how it happens: Commercial fishing fleets target species for the global market, including American consumers. The fleets go after the seafood Americans love to eat — like shrimp, salmon, tuna, crab, and lobster — setting traps and casting gillnets, purse seines, trawls and longlines. But in the course of catching the target species, they often entangle, trap, and hook other animals, like non-target fish, seabirds, sea turtles and marine mammals. It's a tragedy for those animals caught in the wrong place at the wrong time — collateral damage that may prove too much for some animal populations.

Over the past year, NRDC has been examining global marine-mammal bycatch and the populations most likely threatened by U.S. imports of foreign-caught seafood. I say "most likely threatened" because, unlike domestic fisheries, no one knows the total marine-mammal bycatch associated with specific exports to the U.S. market: Most countries do not collect that information, let alone supply it to the United States, which doesn't demand such data.

However, conservationists are able to learn about whale, dolphin and sea lion populations suffering as bycatch from fisheries that likely export at least some of their product to the United States by reviewing the work of marine mammal researchers around the world. NRDC found that North Atlantic right whales, New Zealand sea lions, Mediterranean sperm whales, vaquitas (a rare species of porpoise numbering around 200 that is only found in the northernmost part of the Gulf of California), spinner dolphins in the Indian Ocean, Baltic and Black Sea harbor porpoises, and J-stock minke whales (a distinct autumn-breeding subpopulation found in the Yellow Sea, East China Sea, and Sea of Japan) are threatened by fisheries bycatch. And, enforcing the Marine Mammal Protection Act's provision against imports from those fisheries could force them to adopt better practices that would save the lives of animals from those populations.

We also identified regions of the world — the Northwest Atlantic, Southwest Atlantic, West Africa, the Mediterranean, Southeast Asia and the Indian Ocean, and the Northwest Pacific — that account for significant marine mammal bycatch generally, and which could also benefit from the government cracking down on foreign fisheries that do not meet U.S. bycatch standards.

Enforcement won't be easy and won't necessarily be quick. Motivating foreign fisheries around the globe to adopt better practices that will benefit marine mammals is a tall order. But continued access to U.S. markets is a great motivator. While some fisheries may decide it's not worth the hassle, others will view protecting marine mammals as an opportunity to continue a lucrative relationship with American consumers who love fish, but also want to know that foreign fisheries are working to limit harm to the whales, dolphins and sea lions that they also love.

The greatest danger at this point is that the U.S. government will drag its feet and issue enforcement regulations that are too weak or run afoul of other binding agreements — like World Trade Organization requirements. That's why NRDC's report recommends how the United States can avoid some of these pitfalls and issue regulations that will finally realize the goals envisioned when the Marine Mammal Protection Act was adopted by the U.S. Congress 40 years ago — a level playing field for U.S. fishers that already invest in better bycatch methods and peace of mind for U.S. consumers who don't want their seafood to come with a side of dolphin or whale.

You can find out more about Net Loss: The Killing of Marine Mammals in Foreign Fisheries, NRDC's campaign to reduce international bycatch, and what you can do to help at www.nrdc.org/saveAwhale.

Smith's most recent Op-Ed was "Are Dolphins Reaching a Breaking Point?" The views expressed are those of the author and do not necessarily reflect the views of the publisher. This version of the article was originally published on LiveScience.