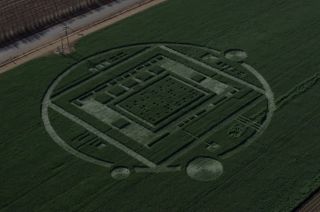 A mysterious 310-foot-diameter crop circle that appeared in a farmer's barley field in Chualar, Calif., was not alien made; rather it was a marketing stunt promoting Nvidia's new Tegra K1 processing chip.
(Image: © Screengrab via YouTube/Nvidia video)

A mysterious 310-foot-diameter crop circle that appeared in a farmer's barley field in Chualar, Calif., as 2013 ended puzzled the public for more than a week. Echoing the sentiments of many, the field's owner told CNN, "To be that intricate in design, it kind of baffles me as to how that was done."Videos and photos of it went viral, and though some dismissed the crop circle as a hoax, others weren't so sure. Some crop-circle experts wrote in-depth analyses that claimed to cleverly decode hidden meanings in the pattern, including that a bright comet would appear in the sky later this year.

It remained a mystery until Sunday night (Jan. 5), when at the Consumer Electronics Show in Las Vegas, the real circle makers stepped forward: a marketing team hired by computer-graphics company Nvidia. The "crop circle" was not an astronomical calendar forewarning of an impending comet, but instead a drawing of the company's new Tegra K1 processing chip. A small team of British crop-circle artists created the complex pattern expertly and without detection. It was a great publicity stunt, and one that left many people wondering how experts could have been fooled.

Why do people fall for such obvious hoaxes? Part of the answer is that the human brain is hardwired to seek meaning, even when there is no meaning to be found. In psychology, the tendency for the mind to find coincidences, patterns and connections in random data is called apophenia. In statistics, there is even a name for this type of fallacy: a Type I error. A common example of a Type I error is a false positive result on a medical test. [In Photos: Mysterious Crop Circles]

Carl Sagan, in his book "The Demon-Haunted World: Science as a Candle in the Dark," discussed the psychology of this phenomenon. "The pattern-recognition machinery in our brains is so efficient in extracting a face from a clutter of other detail that we sometimes see faces where there are none," he wrote. "We assemble disconnected patches of light and dark, and unconsciously try to see a face. The Man in the Moon is one result."

There are many other examples. In 1997, Michael Drosnin published a best-selling book titled "The Bible Code," in which he claimed the Bible contained a code (hidden in numbers and letters) accurately predicting past world events. Drosnin's work was later refuted, with critics demonstrating that the meanings and messages he found were simply the result of selectively choosing data sets from a vast sea of random letters. Similar "hidden codes" have been found in other books, such as "Moby Dick" and "War and Peace," demonstrating that any sizable text can produce such codes if you look long enough.

Conspiracy thinking can also make crop-circle hoaxes believable. Such mistakes come not from too little thinking, but rather overthinking — missing the obvious because you're expecting to see something far more mysterious and complicated. Crop-circle books brim with wild, contradictory theories about what the circles mean, including religious revelations, messages of peace and cosmic harmony, nuclear power secrets, maps of the universe and much more. [Crop-Circle Artists Becoming High-Tech]

This mistake is also common in conspiracy-theory thinking: Events that, at first glance, appear to have a simple, straightforward explanation are suspected of having a more elaborate story behind them. For example, many believe that Princess Diana could not have been killed in a drunk-driving car accident in a French tunnel; that explanation is too simple, too obvious. No, it was all part of an elaborate assassination attempt by the British military, the Illuminati or someone else. Likewise, humans could not have simply gone to the moon in rockets; the moon landing could not have been that easy, so it must have been an elaborate hoax involving sound stages, a cast and crew of hundreds, and so on.

So it is with crop circles: If you want to know what a design means, ask the hoaxers who created it (if you can find them).

The crop-circle phenomenon came to global attention in the 1970s, when simple circles began appearing in the English countryside. The number and complexity of the circles increased dramatically, reaching a peak in the 1980s and 1990s, when increasingly elaborate circles were produced, including those illustrating complex mathematical equations such as fractals. The obvious and best-supported scientific explanation — that the designs are made by artistic hoaxers — is, by far, the least satisfying for many people. Which is more fun to believe: that nighttime pranksters are at work, or that mysterious, unknown intelligent beings are trying to communicate with humanity using complex, coded messages?

You'd think that an alien species smart enough to travel across the galaxy to visit Earth could find a more effective way of communicating with humanity than making ambiguous patterns in plants. Learning another language is something even children can do, and if our planet has been visited for decades by crop-circle-making intelligences, it's reasonable to expect they could write out messages in plain English or another human language. Ironically, that would likely be seen as an obvious sign of a hoax, even if it were real. [7 Huge Misconceptions About Aliens]

In this case, the "experts" were once again fooled; it was, undeniably, an advertising stunt. This hoax also reveals an embarrassing truth about crop circle research: that so-called experts cannot distinguish a supposedly real crop circle from a fake one. If the ones supposedly made by humans are so amazingly complex and intricate — and laden with so much hidden meaning — that they are mistaken for the real thing, then, by definition, all of them could be hoaxes.

This isn't the first time a company has used a crop circle as part of a marketing campaign. It's been done several times; even Hello Kitty's adorable face appeared in a field. Presumably, if a crop circle appeared featuring the trademarked Coke ribbon, the distinctive CBS eye logo or the Chevrolet bowtie, then we could be pretty sure it's fake.

Unless, of course, it's all part of the conspiracy, and an Illuminati-driven multinational cabal has formed an alliance with extraterrestrials to create the patterns as a sort of mind-control advertising experiment. Sound ridiculous? You can't prove it's not true.

Benjamin Radford, M. Ed., is deputy editor of "Skeptical Inquirer" science magazine and author of six books, including "The Martians Have Landed! A History of Media Panics and Hoaxes." His website is www.BenjaminRadford.com.