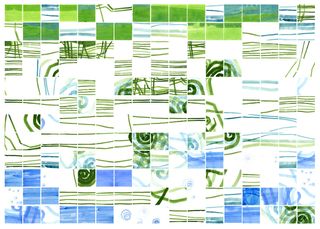 This image shows one of seven floors of Instance of a Dataset, a recently completed commission by artist Daniel Kohn for the Broad Institute in Cambridge, Mass. The product of eight years of collaboration with Broad scientists, this piece explores some of the ideas in genomics using the space of artistic visual metaphor.
(Image: © Kohn-2013.)

Bill O'Brien is an actor-producer and Senior Adviser for Program Innovation for the U.S. National Endowment for the Arts (NEA). Producer of the Tony-honored Broadway revival of "Big River," O'Brien was a seven-year ensemble member of NBC's "The West Wing" (as Kenny, Marlee Matlin's sign language interpreter), has had featured roles on such programs as "Law and Order," "Providence" and "Gideon's Crossing," performed in stage productions throughout the United States, and composed the score for the independent film "Church." O'Brien contributed this article to LiveScience's Expert Voices: Op-Ed & Insights.

"The most beautiful experience we can have is the mysterious — the fundamental emotion which stands at the cradle of true art and true science." — Albert Einstein

Some are motivated by how these ties can spur vibrant new economies. Others are interested in how they may foster creativity through changes in curricula and outreach to schools and in public spaces. Still others share the same motive that likely inspired a curious artist or innovator 40,000 years ago to convert the bone of a vulture into a flute: humanity's persistent urge to pursue beauty and meaning.

Terms have emerged to describe this new and fertile terrain that exists outside the confines of traditional discipline silos, like "art/science hybridity," "interdisciplinary," "transdisciplinary" and even "anti-disciplinary." The platforms for these new modes of investigation and expression range from theaters, museums and other traditional performance spaces to research labs, personal computers, health facilities, public squares, hacker spaces, Processing software, maker-faires and cyberspace.

There is a transformative impact from art, though it is a challenge to define, and tricky to prove. Recent neuro-scientific advances by Nobel Prize-winner Eric Kandel and others have shown that the brain constantly rewires itself based on how people experience the world from one moment to the next. Even our oldest memories are re-created every time they are called forward, constantly being reshaped in ways large and small by new intellectual and emotional contexts.

It's intriguing to think how people may one day (perhaps soon!) be able to build on this work to solve the mystery of what happens at the molecular level when our brain is "on art." We sense that it enhances our awareness of ourselves, each other and the world. In profound examples, it radically alters the perceptions of the person experiencing it, infusing them with new insight and understanding. Great moments of scientific discovery can produce similar eurekas.

Artists and scientists both chase the exhilaration of "knowing" something new and important. And the urge to share this new knowledge with others is strong for both.

The paths that artists and scientists take on their quests for truth can seem unrelated at the surface. The scientific method is, by definition, objective. Here, truth is typically pursued by designing experimental studies that test a potential explanation, or hypothesis. The hypothesis begins life as a promising idea, but must be tested to see if the observation is repeatable before the broader science community accepts it. Artistic method and evaluation can tend to seem driven more by intuition. Artistic truth is largely pursued via the creation of an art object, which may go through a series of drafts or revisions, but ultimately tends to gravitate toward fresh perspective. Typically, when the object is finished, it's time for the artist to move on. The work may be reviewed by others who will attempt subjectively to evaluate its merit, but John Lennon and his critics were not compelled to keep writing and recording "Imagine" over and over again to prove that it was true. A subsequent song can be inspired by "Imagine," but if the author follows the formula too closely, the observations in the song can seem derivative, tired and stale.

But at their core, artists and scientists are not so different from one another. Both endeavor to solve humankind's greatest mysteries through the power of imagination. The great American playwright Eugene O'Neill described his work as an effort to explain the mysterious forces behind life that shape human destiny. I suspect Einstein could relate.

Today, new mysterious forces are beginning to take shape that we are struggling to fully understand. We live in the midst of a disruptive age, where the face of culture and the nature of the human condition are rapidly changing. We are surrounded by infinitely more data than we have the wisdom or capability to process. Artists and scientists can, and probably must, work together to build upon one another's investigations and processes if society is to make sense of these shifts. By thinking, doing and learning with each other, there is potential for artists and scientists to harness emerging knowledge in meaningful and translatable ways.

It turns out, they are.

Visual artist Daniel Kohn and his scientist collaborators at the Broad Institute — an interdisciplinary research institute of Harvard and MIT committed to accelerating the understanding and treatment of disease — provide us with one example. Kohn views the contemporary space as being "polyphonic." He feels that in order for humans to look at, and to really understand, contemporary life and their place in it, they need to peer through parallel fields of human knowledge that see the world through different (but complementary) points of view. These points of view have their own tools and traditions that can be applied in concert to empower investigations in art and science as "knowledge generation fields in an evolving web of meaning."

Kohn sees today's shifting worldview as being somewhat similar to the radical changes that took place as western societies moved through the Renaissance and evolved from Medieval to Enlightenment mindsets. Before, only people close to God could make claims about what was real. Commoners needed them to interpret and explain. After, the universe was considered to be an organized mystery that everyone could pitch in and solve.

These metaphysical shifts influenced everything, everywhere; from art and science to religion and politics. They can still be seen as they were encoded in the artwork and visual systems of the time, as the paradigm shifted through the invention of perspective. This created symbolic laws that could define you and everything else in a visually quantitative way, all the way to infinity. It must have been mind-blowing to live in a time when all of these world views were being completely disrupted and their replacements were not yet largely understood.

This article is based in part on a blog post written by Bill O'Brien in April 2012 for the Art Works Blog of the National Endowment for the Arts. The NEA is committed to encouraging work at the intersection of art, science and technology through its funding programs, research activities and online as well as print publications. Most recently, the NEA's quarterly magazine NEA Arts devoted a full issue to the exciting work done at the intersection of science and art.Go to the magazine's home on the NEA website to read about the neurobiology of music, the relationship between brain waves and choreography, and more.