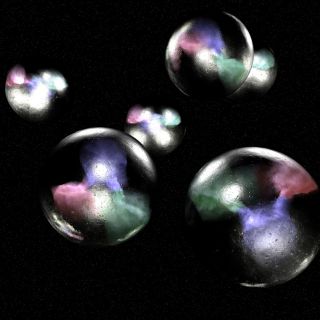 An experiment that offers a peek inside the behavior of subatomic particles called quarks could help answer questions about why the universe is made of matter, and might even be evidence of new, previously unseen particles.

At the Fermi National Accelerator Laboratory (Fermilab) in Illinois, an international team of scientists published the first observation of a charm quark (quarks come in several "flavors") decaying into its antiparticle, a phenomenon called "mixing," first predicted in 1974.

"There was some evidence back in 2007 that this was happening," said Paul Karchin, professor of physics at Wayne State University, and a co-author of the study detailed Dec. 18 in the journal Physical Review Letters. [Wacky Physics: The Coolest Little Particles in Nature]

In the Fermi particle accelerator, or atom smasher, two protons are whipped around at near the speed of light. When they collide, they explode into a shower of particles, including different kinds of quarks.

Atoms are made of protons and neutrons, which in turn are made of even smaller pieces called quarks. There are six flavors of quarks: up, down, top, bottom, strange and charm. They're held together by gluons to make protons and neutrons and by extension, everything else. (Electrons are not divisible in this way.) A proton, for instance, is made of three quarks, two up and one down. Gluons, which carry the strong nuclear force, are elementary particles.

In a collision between protons, the energies are high enough that the quarks can be recombined into other particles called mesons, which are made of a quark and an antiquark.

Mesons, and most of the other particles that result from these high-energy collisions, don't last long. They decay into other kinds of particles in just trillionths of a second. The way the mesons decay reveals what kind of quarks they are made of. In this case the scientists were looking for charm quarks; however, they didn't just find charm quarks but also observed these quarks spontaneously transforming into anti-charm quarks.

The Standard Model, which is the current theory that governs fundamental physics, predicted that charm quarks might decay in this way, but the phenomenon hadn't ever been seen before. In addition, the mathematics of such quark mixing is complicated, making such predictions tricky.

"One of the problems with the Standard Model is that the equations do not have simple solutions," Karchin said.  "It's very difficult to calculate things involving strong force," in high-energy experiments.

So far, it seems quark mixing happens as the Standard Model predicts; even so, the exciting thing, Karchin added, is that further experiments might reveal new kinds of particles coming out of the collisions.

The experiment also might help answer a long-standing question about why the universe is made of matter and not its bizarre counterpart antimatter, even though most theories state that 13.8 billion years ago when the universe emerged, equal amounts of the two forms of matter should have existed. Since matter and antimatter, which has an opposite charge and spin, annihilate when they touch each other, the universe should be left with just photons and elementary particles. That isn't the case.

So-called "charge-parity violation," which suggests matter and antimatter behave differently from one another, may explain the lopsided outcome.

Observing the way charm quarks turn into anti-charm quarks and vice versa might offer insight into the missing antimatter. If they behave the same way, then there is no CP violation. If they don't behave in the same way, then there is. Knowing what kind of nuclear processes show CP violation, and which don't, may explain why the universe is made of matter.

While this experiment showed no CP violation, that might just mean the parameters in which CP violation could occur have been narrowed — it's still possible that it might show up.

Further experiments will pin down whether charm quarks and anti-charm quarks do behave differently -- or not. .

"It's sort of opening up an area of exploration," Karchin said.

Editor's Note: This article was updated to correct a statement saying gluons contained quarks, which they do not.