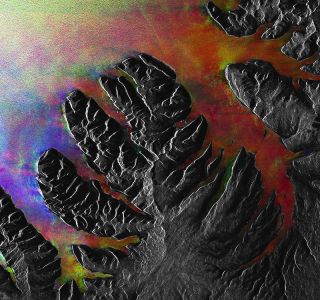 The long, narrow fjords carved into the coast of Iceland make parts of the volcanic island country look like Christmas trees from space.

This image of the Westfjords peninsula in northwest Iceland combines a series of radar observations from the European Space Agency's (ESA) now dead school bus-size satellite Envisat. The gray areas show land, while the colorful sections stand in for water, and the white dots near the middle of the image are radar reflections from the region's largest town, Ísafjörður, according to ESA.

Today, Iceland has more land covered by glaciers than all of continental Europe. And even icier periods of the past left their mark on Iceland's face. Advancing ice blocks gouged deep valleys into Iceland's mountains during ice ages. But after the ice melted during warmer periods, these gorges were filled with saltwater from the coast, creating fjords, as this video from ESA explains.

The $2.9 billion Envisat satellite was originally designed to snap high-resolution photos of Earth for five years, but ended up completing a 10-year mission before it went dark in May 2012.