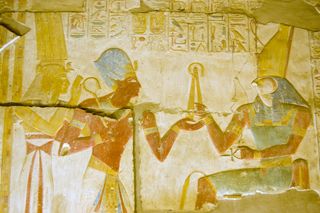 Christmas, in the religious sense at least, centers on one basic tenet of Christian belief: that Jesus was conceived by the power of the Holy Spirit and born to a virgin mother.

A recent Pew poll found that about three-quarters of Americans believe in the Virgin Birth. But stories of miraculous conception aren't unique to Christianity. Unconventional births can be found far outside the manger in mythologies and religious traditions from ancient Egypt to the Aztec empire; they've even become part of Civil War lore.

LiveScience brings you the story behind six miracle births.

Horus, ancient Egypt's falcon-headed patron god of kings, was conceived after the murder of his father Osiris. As the story goes, Seth killed his brother Osiris and scattered the dismembered pieces of his body. Osiris' wife Isis picked up the pieces of her husband — all but his penis, which was thrown into the Nile and eaten by a fish, according to some accounts. After fashioning a golden phallus, Isis reassembled and resurrected Osiris to conceive her son Horus. [The Top 10 Most Controversial Miracles]

The earth mother of the Aztecs, Coatlicue, found a ball of feathers that fell from the sky and became pregnant when she placed it in her waistband. Outraged and suspicious of the origins of their mother's pregnancy, Coatlicue's 400 sons and her daughter, Coyolxauhqui, killed their mother. Her son Huitzilopochtli, the god of war and the sun god, sprang from Coatlicue's womb, fully-grown and armored, when she was killed.

During a thwarted rape attempt, the crippled Greek god Hephaestus (whose Roman equivalent is Vulcan) spilled semen on the virginal goddess Athena's thigh. According to myth, she wiped off his ejaculate with a piece of wool and flung it on to the earth, from which sprang Erechtheus, the mythological king of ancient Athens. Athena became the adoptive mother of Erechtheus and his origin story became a symbol of pride for real-life Athenians who saw themselves as autochthones, or "people sprung from the land itself."

After Minerva sprang from the head of her father Jupiter, Juno (Jupiter's wife) wanted to create a child on her own, too. In the Roman poet Ovid's "Fasti," Juno sought help from the goddess Flora to conceive without her husband. With the touch of a magic flower, Juno was impregnated with Mars. According to some accounts, she also sidestepped Jupiter in conceiving Vulcan, enlisting instead the help of the wind.

Like the birth of Jesus, the birth of Qi bypassed a father in Chinese myth. Qi was miraculously conceived when his mother Jiang Yuan stepped in a giant footprint left by the supreme deity Shangdi. Without an earthly father of her baby, Jiang Yuan tried to abandon him after he was born. But Qi, whose name means "the abandoned one," survived each time his mother tried to get rid of him. Jiang Yuan eventually took back her son, after recognizing his supernatural resilience. Qi proved to be a precious farmer and later became known as Houji, a god of agriculture and the mythical ancestor of China's Zhou dynasty.

Stories about miracle births have also entered the less hallowed realm of urban legend. One rumor out of the Civil War holds that a stray bullet from the battlefield impregnated a young Virginia woman as she stood on her porch. On it's way to the woman's uterus, the bullet allegedly passed through the scrotum of a soldier, picking up the semen needed to make a baby boy. The debunking website Snopes.com attributes the source of this story to a hoax article written by an "L.G. Capers" in The American Medical Weekly. The story, however, persists and has inspired a "Dear Abby" advice column and an episode on the TV show "House."