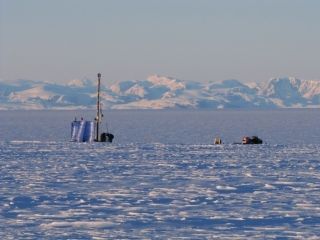 A drill rig was used to extract old snow (firn) cores from within the Greenland snow aquifer.
(Image: © Evan Burgess)

Big surprises still hide beneath the frozen surface of snowy Greenland. Despite decades of poking and prodding by scientists, only now has the massive ice island revealed a hidden aquifer.

In southeast Greenland, more than 100 billion tons of liquid water soaks a slushy snow layer buried anywhere from 15 to 160 feet (5 to 50 meters) below the surface. This snow aquifer covers more than 27,000 square miles (70,000 square kilometers) — an area bigger than West Virginia — researchers report today (Dec. 22) in the journal Nature Geoscience.

"We thought we had an understanding of how things work in Greenland, but here is this entire storage system of water we didn't realize was there," said Richard Forster, lead study author and a glaciologist at the University of Utah.

The discovery will help scientists better understand the fate of Greenland's annual surface melt, which contributes to sea level rise. When the summer sun warms the Arctic island, a giant water world of stunning blue lakes and streams appears atop the ice. Tracking this surface runoff helps scientists account for ice lost to melting each year. Until now, researchers thought most of this water went to the ocean or refroze on the ice. Now they've found a new hiding place.

"This throws an additional complexity into the system," Forster told LiveScience.

There is enough water in the snow aquifer to raise global sea level by 0.015 inches (0.4 millimeters), according to a separate study by the same team published Nov. 30 in the journal Geophysical Research Letters (GRL). Every year, Greenland adds 0.03 inches (0.7 mm) of water to global sea level rise from melting snow and ice, Forster said. [Top 10 Surprising Results of Global Warming]

No one yet knows how old the water in the aquifer is, and whether it stays trapped in the snow or reaches the ocean in slow streams or catastrophic floods. However, the top of the water table rose after Greenland's huge surface melt in 2012, the researchers report in their GRL study.

The group will return to southeast Greenland in the coming years to answer these and other questions, Forster said. "Just seeing how old it is would answer a lot of questions," he said.

The final destination of Greenland's melt water is also key to understanding how the ice sheet ebbs and flows, because water under the ice sheet lubricates flowing glaciers. Researchers know some melt water goes to the bottom of the ice, trickling through cracks and racing through vertical pipes called moulins. Some of the water also simply refreezes on the surface when winter comes. Liquid water sitting in buried snow layers can also slowly warm and melt the ice sheet.

"The existence of this rather flavorless natural snow cone has many implications for the future of the ice sheet, some that may make the ice go away faster and others that help keep the ice a little longer," said Richard Alley, a glaciologist at Pennsylvania State University, who was not involved in the study. "We would like to understand these implications better so we can help reduce the uncertainties about future changes."

Forster and his colleagues discovered the aquifer in 2011, when a drill punched into sopping wet snow, as mushy as a summer snow cone treat or a Slurpee. (This was a year before the big surface melt of 2012.) "Water was pouring out of the core," Forster said — not what one wants to find when all the electronics are mounted outside the drill. A video of the event reveals both excitement and a few choice words among the scientists. [Watch: Discover Greenland's Hidden Aquifer]

The water was stored in hard, compacted snow called firn — the remains of the previous year's snowfall. Forster thinks the aquifer went undiscovered because so much snow falls in this corner of Greenland.

In Southeast Greenland, frequent storms crash into tall mountains, dumping more winter snow there than anywhere else on the icy island. The thick, insulating snow blanket keeps the watery firn liquid during the freezing winter, like a down coverlet, Forster said.

Many drillers have skipped over this part of Greenland because the snow layers are so thick, Forster said, and most people who are drilling cylinders of ice from the ice sheet are looking to see the layers compacted over hundreds and thousands of years. "People who extract ice cores don't want to go through high accumulation layers," he said. But Forster's team was interested in the past 10 years of snowfall, so the southeast was a good research spot, he said.

Ground-penetrating radar, towed by snowmobile, helped the researchers locate more water nearby, which the group confirmed by drilling in 2011 and 2013. When the researchers returned home, they searched airborne radar data from NASA's Operation IceBridge and discovered the true extent of the buried snow aquifer, all in areas with heavy snowfall. Most of the water is in the southeast, but a few pockets appeared in the south and southwest, Forster said. "It all corresponds to these areas of high snow accumulation," he said.

Researchers estimate Greenland has lost more than 200 million tons of ice and snow each year since 2003. The ice sheet will completely disappear when the planet's average temperature rises by 2 to 7.2 degrees Fahrenheit (1 to 4 degrees Celsius) above preindustrial temperatures, as predicted by the latest report from the Intergovernmental Panel on Climate Change, released in September.

"This doesn't change our knowledge that too much carbon dioxide in the air will melt Greenland's ice, but it will help us make better estimates of how much and how fast," Alley said.