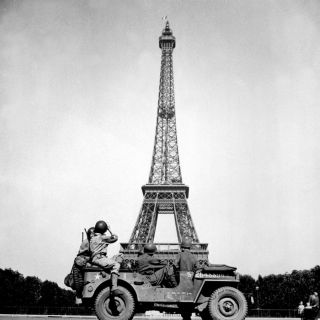 Nothing seems more universal than the truths of mathematics. It should not matter, most believe, where they are expounded and by whom. Mathematics today is the ultimate portable discipline, unconstrained by time, place, nation or ideology.

Or is it? We mostly take for granted that mathematicians and their truths can freely cross borders and transcend local idiosyncrasies. But at the end of World War II and the start of the Cold War, this state of affairs was anything but obvious or inevitable. As a historian of modern mathematics, I spend my days poring over the ordinary details of mathematical life in order to uncover the big story about how and why modern mathematics appears as universal as it does, both in theory and in practice.

For three months this summer, this research took me to universities, libraries and other sites in the history-filled capital city of Paris, France. Thanks to a new partnership between the National Science Foundation and the French Ministry of Higher Education and Research — the Graduate Research Opportunities Worldwide (GROW) program for National Science Foundation Graduate Research Fellows — I have been knee-deep in the memos, budgets, travel receipts, course notes and paper revisions of 60 years ago, in an attempt to explain the global mathematics we see today.

Sixty years ago, mathematicians in Paris were busily rebuilding a world-class system of education and research that had been battered by four years of German occupation during the Second World War a decade before. But these mathematicians did not just reproduce what they had before the war. Instead, they worked together (and competed with each other) to seize new opportunities for travel, collaboration and study made possible by new technologies and international organizations.

Today, in the back rooms of the prestigious Academy of Sciences and the École Polytechnique (Paris's elite two-century-old military academy), you can find centuries of letters, reports and debates about who and what made a good mathematician. Mathematicians in the 1950s argued, for example, over how important a mathematician's international reputation was for his teaching and research at home. They struggled, even, with how to measure such a thing as international reputation. Could a good theory be judged by how many people used it thousands of miles away? Could simply having users so far away, apart from other factors, make a theory better?

Leading Paris mathematicians of the 1940s, 1950s, and 1960s made regular trips across Europe, North America and sometimes also developing regions like Latin America, North Africa and South Asia. While abroad, they learned mathematics from their global colleagues (both local and visiting from other nations) as they promoted their own theories and methods.

But they also saw different ways of organizing research and teaching, and promoted their own ideas about how mathematics should be used, spread, and supported. Common features of mathematics, such as widely distributed lecture notes and research-oriented seminars led by medium-term visiting scholars, underwent lasting changes amidst the budgetary, logistical, linguistic and other challenges on the frontiers of postwar mathematics.

One leading French mathematician, Laurent Schwartz, had trouble receiving government permission to visit the United States because he was an outspoken communist at a time when the U.S. Department of State vigorously opposed those with his ideology. So instead of visiting the U.S., he toured a long list of other countries, including Brazil, Argentina, India, Vietnam and Algeria, winning passionate followers for his theories and sometimes also his political views, wherever he went. I spent days paging through the records of the United Nations Educational, Scientific and Cultural Organization (UNESCO), which sponsored several of Schwartz's trips.

UNESCO's day-to-day records give a detailed picture of how mathematical scholarship at outposts in the developing world was more connected to well-known top institutions in Europe and America than one might expect. For example, the new regional mathematics center in Buenos Aires, Argentina, may have been dismissed by some as an insignificant backwater institution that should have been grateful for any attention it might receive from famous mathematicians from economic powerhouses. But UNESCO's files (and those elsewhere in Paris) show that the Buenos Aires mathematics center and others like it did more to shape their more famous peer institutions than has been widely recognized.

In particular, the center offered a point of contact for mathematicians on opposite sides of the Iron Curtain – one that forced them to refine and repackage their theories and organizational priorities for a sometimes challenging new setting. Ironically, this increasing interconnection allowed mathematicians to push ahead with increasingly esoteric theories, by assuring them a far-flung audience for their latest and greatest new ideas. In some ways, today's highly specialized mathematics is less universal than it was 50 or 100 years ago.

History is not often made in big dramatic events, but rather in the daily efforts and adaptations of many quiet individuals. My challenge as a historian is to assemble these little pieces into a bigger picture of a period in global history that profoundly shaped later mathematics, and much else besides.

Today's seemingly free flow of mathematical books and papers, as well as the abundance of regional and international meetings and collaborations for producing and sharing new research, are the outcome of years of invisible negotiations amongst individuals and institutions too numerous to name. To comprehend the modern global mathematician sometimes requires a very local perspective.

Editor's Notes: Michael J. Barany recently completed his tenure as a National Science Foundation Graduate Research Fellow (Grant No. DGE-0646086) in Princeton University's Program in History of Science. His writings on the history of science and mathematics can be found at http://www.princeton.edu/~mbarany

The researchers depicted in Behind the Scenes articles have been supported by the National Science Foundation, the federal agency charged with funding basic research and education across all fields of science and engineering. Any opinions, findings, and conclusions or recommendations expressed in this material are those of the author and do not necessarily reflect the views of the National Science Foundation. See the Behind the Scenes Archive.