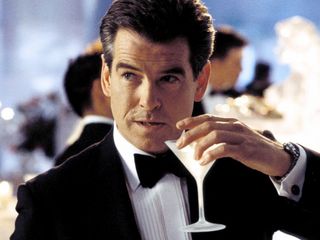 James Bond's famous catchphrase "shaken, not stirred" may have stemmed from his inability to stir his drinks due to an alcohol-induced tremor affecting his hands, researchers reveal in a new, tongue-in-cheek medical report.

Such a tremor would be likely in a spy who drank more than four times the recommended limit of alcohol throughout his missions, they said, writing in a special Christmas issue of the BMJ — a lighthearted edition of the medical journal that includes real research.

For their report, the researchers read all 14 books of the fictional British Secret Service agent, noting every alcoholic drink, and used standard alcohol unit levels to calculate Bond's alcohol consumption — all in an effort to determine whether 007 was a martini connoisseur or a chronic alcoholic.

"Ideally, vodka martinis should be stirred, not shaken. That Bond would make such an elementary mistake in his preferences seemed incongruous with his otherwise impeccable mastery of culinary etiquette," the researchers wrote in their study.

The results showed that Bond consumed on average 92 units of alcohol weekly (a 6-ounce glass of wine, or a pint of beer, each contain two units of alcohol). His maximum daily consumption was 49.8 units.

There were days throughout his missions that Bond didn't drink at all, but on most of these, he was unable to drink — for example, when he was held prisoner. The researchers found that Bond had only 12.5 alcohol-free days out of 87.5 days on which he was able to drink, according to the study. [Infographic: James Bond Is the Man with Golden Liver]

At his level of alcohol intake, the quintessential spy could have not been able realistically to perform his tasks, particularly at the skilled levels described in the books.

Yet, Bond is hailed as being the "best shot in the Secret Service," the researchers said.

"People who drink at this level are severely functionally inhibited and unless this refers to shots of various spirits, this assertion is likely to be pure fantasy," the researchers said.

Excessive alcohol use can lead to higher risks of various health problems, including liver diseases, cancer, poisoning and injuries. Although around 4 percent of deaths worldwide are related to alcohol, in the entertainment world, excess alcohol consumption is often portrayed in a positive, even glamorous, light, the researchers said.

Bond's level of drinking would put him at high risk of multiple alcohol-related diseases and an early death, the researchers said. [7 Ways Alcohol Affects Your Health]

Tremor is one of the many problems that Bond had a high risk for, they said. Repeated exposure to toxins like alcohol can damage parts of the brain, such as the cerebellum that controls movements, and cause tremor.

"We have shown that Bond's alcohol intake is of sufficiently high frequency and duration to cause such cerebellar damage," the researchers said. "He was unlikely to be able to stir his drinks, even if he would have wanted to."

Analyzing Bond's behavior in the books, the researchers also found out that Bond would score three out of four on a standard questionnaire that is used to identify alcohol dependence.

The researchers said that it has been postulated that Bond's habits took after those of his creator, Ian Lancaster Fleming, an ex-Naval intelligence operative who enjoyed smoking and drinking to excess, and died at a relatively young age, 56, from a heart attack.

"We suspect that Bond's life expectancy would be similar," the researchers said.