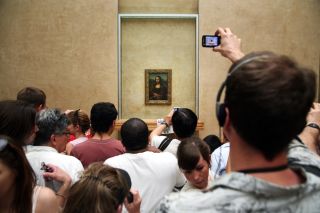 When it comes to looking at art and artifacts, new research may encourage habitual shutterbugs to put away their cameras. A study suggests museum-goers are less likely to remember objects they photograph than objects they simply observe.

However, taking a zoomed-in photo of a specific part of a painting, mosaic or statue could help preserve memory of the entire piece, the researchers found.

"It occurred to me that people often whip out their cameras and cellphone cameras to capture a moment and were doing so almost mindlessly and missing what was happening right in front of them," Henkel told LiveScience in an email.

"Years ago when I was at the Grand Canyon, I remember someone coming up to the canyon's edge, taking a shot with their camera and then walking away, like 'got it — done!' barely even glancing at the magnificent scene sprawling in front of them," Henkel added.

For her first experiment, Henkel recruited 28 undergraduates for a tour at the university's Bellarmine Museum of Art. Pausing in front of 30 objects, the students were randomly assigned simply to observe 15 artifacts and photograph the other 15.

The next day, the study participants were given memory tests about their tour. They were asked to write down the names of all the objects they saw; they were quizzed about specific details on the objects; and they were given a photo-recognition test.

In a second experiment, 46 undergraduates went on a similar tour of the museum that focused on 27 objects. These students were randomly assigned to look at nine objects, to photograph another nine and to take pictures of a specific detail like the head or feet of a statue on the remaining nine.

Though Henkel found the same photo-taking impairment effect in this experiment, zooming in on the details of an object seemed to help the students remember the whole thing later.

Memory research suggests photos might help museum-goers remember their trip in the long term, but only if they actively review and interact with the pictures rather than just amass them, Henkel said.

Since the students did not pick which objects to photograph in either experiment, it remains unclear how choice might influence what people remember later, Henkel explained. Henkel is planning a study next semester to look at the differences in memories of photos that people choose to take versus photos they are told to take.

Taking photos of what interests a person, what draws their attention and what they want to remember could help preserve memories, Henkel said in an email, "though it could also be that anytime we mentally count on technology to think or remember for us, that could hurt."

The research was detailed in the journal Psychological Science.