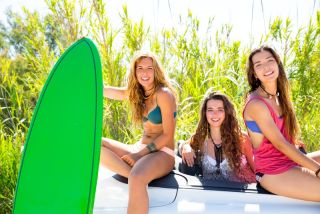 Valley girl talk, a style of talking marked by a rise in pitch at the end of sentences, seems to be spreading throughout Southern California and elsewhere.
(Image: © holbox | Shutterstock)

SAN FRANCISCO — Valley girl talk, a style of talking marked by a rise in pitch at the end of sentences, is not just for rich girls from Encino any more.

The uptalk is, like, totally ubiquitous amongst native Southern Californians of all demographics, including males, new research shows.

Understanding that prevalence could help prevent miscommunications or negative impressions by Midwesterners and others unfamiliar with the SoCal language, said study co-author Amanda Ritchart, a linguistics doctoral candidate at the University of California San Diego.

In Southern California, "most people talk like this, including males and people from all different ethnic groups," said Ritchart, who will present the findings today (Dec. 5) here at the 166th meeting of the Acoustical Society of America. "It's a normal thing, it's not that we're confused or not very assertive."

Despite its pop-cultural relevance, uptalk, a style of talking in which speakers end their sentences on a rise much like a question, hasn't been studied much, Ritchart said. No one knows exactly how the speaking style first emerged, but by the 1980s, the stereotype of the uptalking Valley Girl was firmly entrenched in pop culture. The style of speech was probably first popularized by "rich, white girls" from the San Fernando Valley outside of Los Angeles, Ritchart said. [10 Things That Make Humans Special]

[Listen to audio examples of uptalk]

But Ritchart suspected that the popularity of "Valleyspeak" has since spread beyond the wealthy suburbs of L.A. To estimate the prevalence of uptalk, Ritchart and her colleagues recorded 24 college-age Southern California natives as they gave directions or described events in a sitcom. The people were from different socioeconomic and ethnic backgrounds and across many parts of Southern California. Afterward, the team analyzed their voices.

The rise in pitch at the end of sentences was found in everyone, across all demographic groups. Despite the stereotype, Valley Girl speak wasn't confined to women: Men tended to use it too, although it was less pronounced than it was in women. (Men often had a pitch plateau at the end of a sentence, rather than a rise, Ritchart said.)

The results suggest that the uptalk accent is very common in Southern California, and totally isn't a sign of being timid, ditzy or confused, as some outsiders might believe, Ritchart said.

And uptalk may be spreading. It has been documented in Australia and New Zealand, and even in "micro-communities," such as sororities in Texas.

Still unknown? Whether uptalk has spread to older speakers in the region. It's also possible that as young Valley speakers grow up and enter the workforce, they may normalize the dialect until negative stereotypes associated with it fade away, Ritchart said.