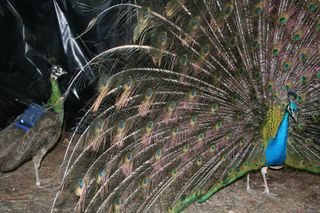 A male peacock displays his colorful feathers as part of a courtship ritual. Researchers used eye-tracking technology and cameras to observe what captured female peahens' attention during these dramatic displays.
(Image: © Jessica Yorzinski)

Peacocks and peahens — together known as peafowls — are world famous for the peacock's enormous, flashy train, which it uses to woo females. But what else does the mating behavior of peafowls involve?

Outside of the breeding season, peafowls roam around in small groups that typically consist of five or six peahens and one or two peacocks. But during the five-month-long breeding season, the birds' social organization completely changes, said Jessica Yorzinski, an evolutionary biologist at Purdue University in Lafayette, Ind.

Peacocks set themselves up in individual display areas that are fairly spread out — they remain in acoustic contact with each other, but typically cannot see one another. They then try to lure in females by giving off loud courtship calls that can travel across several miles.

"At this time, the male already has his train up and is casually moving around in his display area," Yorzinski told LiveScience. When a peahen enters the peacock's area, he will direct his display at her and try to keep facing her as she moves around him. To further entice his prospective mate, the peacock will conduct a rattling display, where he shakes his quills, causing them to make a sound.

Recently, Yorzinski and her colleagues discovered that peahens ignore most of a peacock's display train, and instead keep their gaze focused on only the lower portion of the train. They also appear to look back and forth across this area of the train, potentially as a way to gauge its width and symmetry, which could yield clues about the peacock's age and fitness.

The upper portion of the train, on the other hand, may help peahens spot peacocks across large distances, or over dense foliage.

If the peahen accepts the peacock's advances, she will crouch down on the ground. The peacock will then perform a "hoot dash," where he rushes toward the peahen while making a really loud call. Yorzinski previously found that this copulation hoot might function to attract other females.

Finally, the peacock will climb onto the peahen's back and transfer sperm by pressing his cloaca (waste and reproductive orifice) against her cloaca.

Mating complete, the pair departs ways to mate with other peafowls.