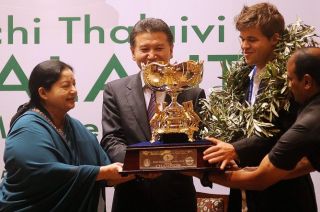 Computers have changed the face of chess, and put Carlsen in a winning position.
(Image: © EPA/Stringer.)

For his precocity, newly crowned World Chess Champion Magnus Carlsen was named “The Mozart of chess”. For his tenacity and comfort with long games he was dubbed “The Nadal of chess”. More prosaically, the BBC called him “The Justin Bieber of chess”.

In a poetic turn, former World Champion Garry Kasparov said he has the super talent of Harry Potter, and American grandmaster Hikaru Nakamura compared him with Tolkien’s Sauron.

Whatever your preference, the 22-year old Norwegian is now famous because last week he defeated Indian Viswanathan Anand 6.5 to 3.5 and clinched the World Chess Championship.

Was this result expected? If we take into account the Elo rating difference between the players (2870 to 2775) the estimated score in 10 games was 6.33 to 3.66. So: yes. However, it was anticipated that Anand’s experience in World Championship matches would have made a tighter contest.

The role of computers in chess

One of the distinctive features of this match compared to, for example, those played between the Russians Garry Kasparov and Anatoly Karpov in the 1980s, is the central role played by computers.

After IBM’s Deep Blue defeated Garry Kasparov in 1997 and then “retired”, chess computers kept improving their strength. Nowadays, chess engines like Houdini and HIARCS can beat the top chess players in the world running on a laptop.

Before the computer era, understanding the games of the world championships was difficult even for strong club chess players. Nowadays, it is possible to watch the games live on the internet and run a chess engine on one’s computer.

The engine tells you the best moves in each position, and evaluates each move. These engines are so good that beginner players immediately realise when the world class players make mistakes.

When some chess master commentators give live online commentary of the games, they refuse to use the engines for their commentary. They want to convey to the audience the moves the human grandmasters may be considering, not what silicon machines are calculating. However, they rarely succeed: fans, who are running the analysis on a chess engine, impatiently send a tweet to the commentator with the move that “the computer” suggests.

Chess engines are so powerful and portable that cheating has become a serious issue. Russian grandmaster Vladimir Kramnik was unfairly accused of cheating by his opponent, Bulgarian grandmaster Veselin Topalov, in the World Chess Championship match played in Elista (Russia) in 2006.

The allegation was that Kramnik was getting help from a computer during his frequent visits to the toilet. This incident was called “toiletgate”. Since then, in some tournaments chess players are scanned with metal detectors.

This year, Bulgarian player Borislav Ivanov surprised the world by beating several players 400 Elo points stronger than him (his expected score in 10 games against those player was 1 to 9), and by playing incredibly fast. When his games were compared to those of Houdini the match between them was almost perfect.

This would be impossible even for Magnus Carlsen! His fraudulent activity came to an end when American grandmaster Maxim Dlugy observed that Ivanov was walking in a strange way.

Before his game against Ivanov he took off his shoes and requested the organisers that Ivanov do the same. Ivanov refused to do that and was forfeited. After that he decided to retire from chess.

These stories are a long way from the days when grandmasters’ opening preparation relied on the Chess Informant. This Balkan publication put out a few hundred world class games every six months (from 1966 to 1990) or four months (from 1991 to 2011).

Nowadays, chess players’ opening preparation is based on databases with millions of games, updated every day.

A more recent development is the “opening books”. These are not written books. Specialists make the chess engines play a particular opening thousands of times, and discover “novelties”; that is, very good moves that were not played in grandmasters' games before.

Opening books are used in two ways. First, they are stored in chess engines' memories, so they can play the openings mostly by memory, not calculation. Second, they are studied by grandmasters in order to use the novelties in tournament games.

There were rumours that Carlsen got preparation assistance from a supercomputer in a huge basement in Norway.

Paradoxically, despite the role of computers in opening preparation, Magnus’ weakest point is his openings. Indeed, some have suggested that if he improves his opening playing, the sky is his limit.

On the other hand his middle game and endgame playing resemble how engines play chess. Humans struggle to, for example, return a piece to the position it was located one or two moves earlier, even though it would be the objectively best move.

Computers don’t care about the past and play the move that their calculations determine is the best. Carlsen seems to be able to avoid this human bias, and play more like a computer.

Magnus Carlsen has not only become the World Chess Champion, he has created a different style of playing, and he has popularised chess in an unthinkable way. Who knows? Maybe in the future other sports would refer to their champions as “The Magnus Carlsen of…”