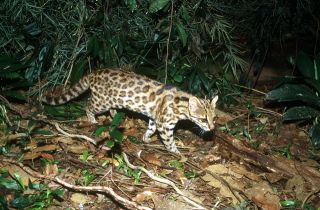 An oncilla (Leopardus guttulus) found in southern Brazil. They are one of the smallest cats in South America, maxing out at 3 kilograms (about 6.5 lbs.).
(Image: © Projeto Gatos do Mato - Brasil / Project Wild Cats of Brazil)

Don't judge a cat by its cover.

Oncillas are housecat-size felines found throughout much of South America, and are also known as little tiger cats, little spotted cats or tigrinas. But not all oncillas are the same: New research suggests that little tiger cats in northeastern Brazil belong to a different species from those elsewhere on the continent, although they look virtually identical.

Researchers analyzed the genetic material of oncillas in northeastern Brazil, and compared them with nearby populations in the south. They found that there was no flow of genes between the two populations of oncillas, and hasn't been any for millennia, according to the study, published today (Nov. 27) in the journal Current Biology.

This, along with other genetic differences, led researchers to conclude the two populations do not interbreed and are in fact different species, said study co-author Eduardo Eizirik, a researcher at Pontifical Catholic University of Rio Grande do Sul in Brazil. [In Photos: Tiger Species of the World]

The study "illustrates how much is still unknown about the natural world, even in groups that are supposed to be well-characterized, such as cats," Eizirik told LiveScience. "In fact, there are many basic aspects that we still don't know about wild cats, from their precise geographic distribution and their diets to even species-level delimitation, as in this case."

Since this population of oncillas is a unique new species, there is an urgent need to learn more about it and its rarity; for example, whether or not it may need protection under conservation laws, Eizirik added.

Both species of little tiger cats live in rainforests and savannahs, and sport yellowish-ochre fur with a black rosettelike pattern. Though the cats primarily live on the ground, they are agile tree climbers, and feed on birds and small mammals like rodents, according to the University of Michigan. They are one of the smallest cats in South America, maxing out at 3 kilograms (about 6.5 lbs.).