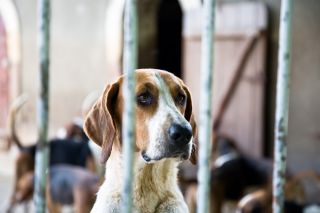 Cats, dogs and other animals have been integrated into humans' lives to a surprising degree: A child growing up in the United States today, for example, is more likely to have a pet than a father at home, according to the American Humane Association.

But in households with a history of domestic abuse, pets can be a complicating factor. Not only are pets likely to be the target of abuse, but people who are the victims of abuse often refuse to seek shelter for fear of abandoning their pets.

The statistics are grim: Seventy-one percent of pet-owning women who go to abuse shelters reported that their abuser had injured, maimed, threatened or killed pets, according to the National Coalition Against Domestic Violence. And as many as 40 percent of abused women stayed in an abusive home because they refused to leave their pets behind. [In Photos: America's Favorite Pets]

A turning point, however, came from an unlikely source: Hurricane Katrina. "People were photographed holding onto their animals for dear life," Jenny Coffey, a social worker with the Mayor's Alliance for NYC's Animals, a nonprofit coalition of animal rescue groups, told Pacific Standard magazine. "The shelters that didn't allow the animals didn't realize how much they were losing."

Pets weren't allowed in the New Orleans Superdome and other emergency shelters — a rule that many observers believe may have contributed to the number of storm-related deaths and injuries, as pet owners refused to abandon their animals. So, one year after Hurricane Katrina, Congress passed legislation mandating that domestic animals be included in states' disaster-evacuation plans.

The 2006 legislation made a real difference last year, when Hurricane Sandy pounded the East Coast of the United States: Every one of New York's emergency shelters advertised their policies welcoming pets, according to Pacific Standard.

The same principle is being applied in domestic-violence shelters: RedRover, a North American nonprofit organization dedicated to taking animals out of crisis situations, offers financial assistance for victims of domestic violence and their pets, paying for emergency boarding and veterinary care. The organization also offers grants to local shelters seeking to create additional space for pets from violent households.

Local organizations are also addressing the problem: The Mayor's Alliance for NYC's Animals, Purina and the Urban Resource Institute have joined forces to promote a pilot program in New York City called People and Animals Living Safely, or PALS. The program finds safe shelter for families with pets, protecting both people and animals from abuse.

Though significant strides have been made, there's still room for progress. There are now 73 domestic-abuse shelters nationwide that accept pets, but that's only about 3 percent of shelters, Pacific Standard reports. And even New York City's domestic-abuse hotline doesn't routinely ask about pets, so many abused women may not know they have pet-friendly shelter options.

The American Humane Association recommends that victims of domestic abuse who also have pets avoid leaving animals behind with abusers by keeping all pet records and vaccinations up-to-date, and by planning ahead for pet-shelter options with veterinarians, friends or local animal shelters.

Correction: This article was updated at 11:30 a.m. ET to clarify that the Mayor's Alliance for NYC's Animals is not a government-affiliated organization.