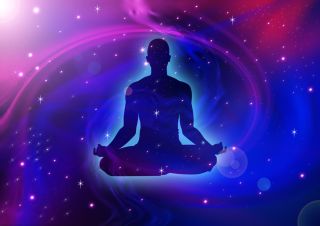 The brain relies on a complex interplay of information from different senses to produce the experience of being inside of a body — even when it's someone else's body, researchers say..
(Image: © rudall30 | Shutterstock)

SAN DIEGO — The human mind effortlessly constructs the feeling of inhabiting a body, and now scientists are figuring out how the brain produces that experience.

The findings, presented here Sunday (Nov. 10) at the annual meeting of the Society for Neuroscience, highlight which brain regions are active when a person has an out-of-body experience.

Recent studies have shown that the brain incorporates information from multiple senses and the first-person visual perspective to create a sense of body ownership. But it's still unclear how the brain perceives the body's location in space. [Top 10 Unexplained Phenomena]

In the study, which has not yet been published in a scientific journal, participants lay inside an MRI scanner while wearing a head-mounted display that showed a first-person camera view of another person's body lying in a corner of the scanner room, with their head either parallel to a wall or perpendicular to it. Researchers from the Karolinska Institutet in Sweden repeatedly touched each participant with an object while simultaneously touching the body shown in the camera view. This gave participants the illusion that the body in the camera view belonged to them.

To heighten the illusion, the researchers used a knife to threaten the body in the camera, and measured the participants' skin conductance, or ability to conduct electricity (humans sweat more when they're scared). Indeed, the conductance went up for participants as they viewed their virtual body being threatened.

While the participants were experiencing the body illusion, their brains' parietal and premotor cortices lit up. These areas are involved in integrating sensory information and planning body movements. In addition, the level of brain activity corresponded with the strength of the illusion, suggesting these brain regions are important for producing a sense of body ownership.

The researchers also examined which brain areas represented a person's location and the direction their head was facing. Using algorithms that looked at patterns across the entire brain, they found that in addition to the parietal cortex, the hippocampus — a brain region critical for memory — was also active in producing a sense of location.

The findings suggest the brain relies on a complex interplay of information from different senses to produce the experience of being inside of a body — even when it's someone else's.