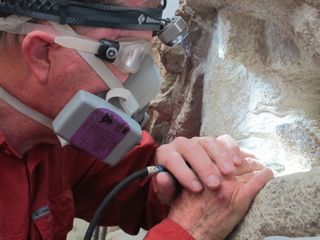 Rudy Ramsey, a volunteer at the Morrison Natural History Museum in Morrison, Colo., uses a fourth-generation airscribe tool to prepare a delicate fossil. The preparation of this fossil was delayed as paleontologists waited for tools precise enough to remove it from the rock without damaging it.
(Image: © Stephanie Pappas for LiveScience)

The buzz of an air scribe against sandstone makes your hand tingle within minutes. The tool looks like a bulbous metal pen and sounds like a tattoo gun. But it's actually a revolutionary way to coax fossilized bone, ever so carefully, out of rock.

Air scribes are relatively new to the paleontological scene, and they're an example of how the technology of the field has progressed. A century ago, a paleontologist preparing a fossil for study and display had only teeny chisels and brushes for help. Today, technology borrowed from dentistry and other fields makes the work easier — though no less painstaking.

"What it really takes is a small, sharp tool; an excellent magnifying microscope; and a whole lot of patience," said David Temple, associate curator of paleontology at the Houston Museum of Natural Science. [In Photos: Amazing Dinosaur Fossils]

The methods of moving a fossil from the field to the museum floor haven't changed much since paleontology erupted as a field in the late 1800s, but the materials have. Back then, fossil hunters would extract fossils from the field in protective jackets made of padding and paste. The first paste ever used, Temple told LiveScience, was basically oatmeal.

Plaster is the standard today, but even that is subject to innovation. Lightweight, expanding foam protects some fossils during transport. Likewise, the adhesives used to hold together fragile bone have evolved from simple white glue to high-tech formulas that range from watery to gellike.

But some of the biggest changes have come with increasingly precise pneumatic tools that can chip rock away from fossils with great delicacy. The tools vibrate like "miniaturized jackhammers," said Mike Getty, chief preparator of paleontology at the Denver Museum of Nature and Science.

"We can use a really low pressure from the air compressors and be able to get in and clean very fine surfaces," Getty told LiveScience.

These tiny pneumatic tools come in various sizes, from handheld chisels used to vibrate away relatively large flakes of rock to tiny needlepoints used for microscopic work. The smallest of these "Micro-Jack" tools manufactured by Utah-based supplier PaleoTools has a tip measuring just 1/16 of an inch (1.6 millimeters) in diameter — fine enough to work on the toe bones of a mouse, according to the company.

In some cases, the right tools make it possible to expose a fossil. In 2003, paleontologist Matthew Mossbrucker of the Morrison Natural History Museum in Morrison, Colo., identified some exposed teeth from a boulder at nearby Dinosaur Ridge, just west of Denver, as belonging to a long-necked dinosaur.

But it wasn't until 2011 that Mossbrucker and his museum colleagues were able to start digging into the boulder. The tools simply weren't advanced enough. Sandstone from the Morrison Formation, where the fossil was found, is very hard, and the fossils themselves are infused with natural glass.

"It's like trying to clean a porcelain doll out of a block of concrete with a jackhammer," Mossbrucker told LiveScience.

He and his preparators now use pneumatic tools hand-manufactured in Germany by a retired dentist. Using these tools, they've discovered that the teeth in the boulder belong to an Apatosaurus.

"You acquire the ability to work close to the bones without touching them," said Rudy Ramsey, a retired software developer and museum volunteer who has been helping reveal the Apatosaurus fossil for the past two years.

Print your own dinosaur

Many fossils, no matter how carefully prepared, are too fragile for display. So paleontologists make casts of bones, molding them so carefully that a scratch on a bone will show up on the cast.

But now, a new technique is promising to change the way casts are made. Cast makers are now experimenting with 3D scanning and 3D printing to copy dinosaur bones. The new 3D-printing technologies are especially promising, Temple told LiveScience, as they would allow for the printing of skeletons in various sizes. Want a desktop T. rex that's exact, down to every little bone projection and condyle? Printing fossils in 3D could make it happen. [The 10 Weirdest Things Created By 3D Printing]

Micro-CT scanning and X-rays are also being used in some fossils to image what's inside a rock before taking the chisel to it, Temple said. Such imaging can prevent surprises. It can also illuminate difficult-to-prepare fossils. The Apatosaurus pieces in the Morrison boulder are so closely jumbled with other fossilized bones that the researchers may finish off their investigation with micro-CT scanning rather than by chipping the bones out of the rock, Mossbrucker said.

Future innovations in paleontology prep include reversible superglues, Temple said. Lasers may also help scientists break through tough crusts to get at bones encased underneath — though so far, lasers heat the bone surface too much to be used safely, Getty said.

"I would like to see that advanced," Getty told LiveScience.

For his part, Temple dreams of ground-scanning technologies that could reveal fossils without digging. Failing that, he said, he'd love a time machine.