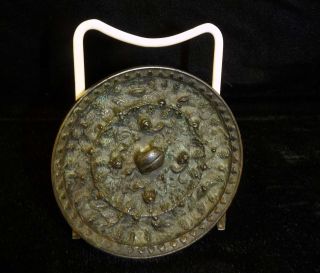 This Bronze mirror decorated with fish and birds dates back to China's Tang Dynasty (618 – 907 A.D.). It was seized along with 26 other items thought to be illegally imported into the United States.
(Image: © ICE)

A Florida art dealer is facing heavy fines and possible prison time in connection with an ancient artifact smuggling case.

Francois B. Lorin, 74, of Winter Park, was hit with obstruction of justice charges after he forged documents in an attempt to legitimize an illegal shipment of ancient Chinese objects, federal authorizes allege.

The artifacts in question are hundreds, even thousands of years old. They include Neolithic amulets, a gold and silver inlaid container and a bronze mirror elaborately decorated with fish and birds, according to court documents.

U.S. Customs and Border Protection discovered the artifacts in Miami, Fla., in June 2011. They detained the shipment from Hong Kong "due to inconsistencies between the shipping documentation and physical examination," said a spokesperson with U.S. Immigration and Customs Enforcement (ICE).

A certified appraiser who specialized in Asian art and archaeology helped federal investigators assess the items, the spokesperson said. Of the 488 art objects contained in the shipment, 27 were deemed contraband, because they predate A.D. 907.

In 2009, the United States and China signed an agreement that makes it illegal to import any archaeological materials that date from China's Paleolithic Period (c. 75,000 B.C.) through the end of the Tang Period (A.D. 907), unless the importer has explicit government approval. However, dealers don't need permission to reimport artifacts that were initially brought into the United States before 2009.

After Lorin's shipment was seized, he allegedly created false documents and backdated invoices to claim the Chinese artifacts were acquired before 2009.

Lorin faces a maximum sentence of 20 years in prison and a $250,000 fine, according to ICE officials. The art dealership Lorin & Son, LLC, also faces a maximum $500,000 fine and up to five years' probation.

Through its cultural property investigations, ICE says it has returned more than 7,150 artifacts to 26 countries, including Germany, Italy, Peru, Cambodia and Iraq.