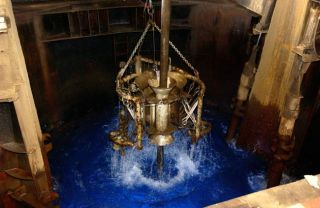 A camera on a vibration isolated frame is raised through the â€œmoonpoolâ€ â€“ the hole in the middle of the ship through which the drill pipe passes. The camera is used to observe the seafloor and guide the drill pipe during re-entry into the hole after the drill bit is changed.
(Image: © IODP/TAMU)

It's not quite the center of the Earth, but scientists have drilled nearly a mile into the planet's ocean crust, retrieving samples from the pristine layer of igneous rock for the first time.

Scientists onboard the drilling ship JOIDES Resolution in the Pacific Ocean, about 500 miles west of Costa Rica, bored into the planet's crust and recovered black rocks called gabbro from intact crust.

Gabbro is a dense type of rock formed from the slow cooling of magma chambers beneath mid-ocean ridges. Along with gabbro, the team hauled up a complete stratified core of the overlaying crust.

By studying the gabbro along with the crust section, scientists will better understand the formation and structure of oceanic crust, a process that affects plate tectonics, builds mountains, and sets off earthquakes and volcanoes.

"This process covers 60 percent of the Earth's surface, and it's an ongoing process that has replaced all of the seafloor since 180 million years ago," study co-author Douglas Wilson of the University of California, Santa Barbara told LiveScience. "In terms of understanding the planet, it's a fundamental process."

Studying oceanic crust and the layers below will also help scientists learn how deep sea volcanoes and other hot vents alter the chemistry of ocean water.

The study is detailed in the April 21 online edition of the journal Science, Sciencexpress.