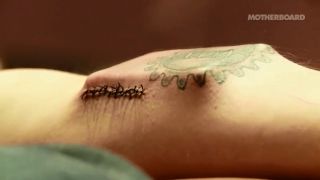 Kids, don't try this at home: A self-described "biohacker" had a big electronic chip — almost as large as a deck of cards — inserted beneath the skin of his arm. Without a doctor's help. And without anesthetics.

Tim Cannon is a software developer from Pittsburgh and one of the developers at Grindhouse Wetware, a firm dedicated to "augmenting humanity using safe, affordable, open source technology," according to the group's website. As they explain it, "Computers are hardware. Apps are software. Humans are wetware."

The device Cannon had inserted into his arm is a Circadia 1.0, a battery-powered implant that can record data from Cannon's body and transmit it to his Android mobile device. Because no board-certified surgeon would perform the operation, Cannon turned to a DIY team that included a piercing and tattoo specialist who used ice to quell the pain of the procedure. [Super-Intelligent Machines: 7 Robotic Futures]

Now that the device is inserted and functioning, Cannon is one step closer to achieving a childhood dream. "Ever since I was a kid, I've been telling people that I want to be a robot," Cannon told The Verge. "These days, that doesn't seem so impossible anymore."

The Circadia chip isn't particularly advanced: All it does is record Cannon's body temperature and transmit it to his cellphone over a Bluetooth connection. While this isn't a huge improvement over an ordinary thermometer — how analog! — it does represent one small step forward in what will undoubtedly be a continuing march toward greater integration of electronics and biology.

Cannon is hardly the first individual to have technology implanted into his or her body — just ask former vice president Dick Cheney (who had a battery-powered artificial heart implanted), or any dog with a microchip.

Some are referring to biohacking as the next wave in evolution. "I think that's the trend, and where we're heading," according to futurist and sci-fi author James Rollins.

"There's a whole 'transhuman' movement, which is the merging of biology and machine," Rollins told LiveScience in an earlier interview. "Google Glass is one small step, and now there's a Japanese scientist who's developed the contact lens equivalent of Google Glass. And those are two things you put right on, if not in, your body. So I think we're already moving that way, and quite rapidly."

Cannon sees future refinements as being able to do more than just passively transmit information. "I think that our environment should listen more accurately and more intuitively to what's happening in our body," Cannon told Motherboard. "So if, for example, I've had a stressful day, the Circadia will communicate that to my house and will prepare a nice relaxing atmosphere for when I get home: dim the lights, [draw] a hot bath."