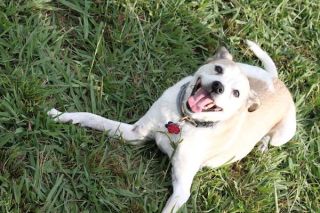 Dogs have different emotional responses to their peers depending on the direction of a tail-wag, a new study found. Seeing a fellow dog swing its tail to the right keeps canines relaxed, while a wag to the left side of the dog's body seems to induce stress, the researchers say.

For their study, a group of researchers recruited 43 pet dogs of various breeds. The animals were outfitted with a vest that monitored their heart rates, and they were shown videos of other dogs either wagging their tails to the left or to the right. [7 Surprising Health Benefits of Dog Ownership]

The pets that watched left-side tail wagging behaved more anxiously and their heart rate sped up, the researchers said, while the dogs that watched one of their peers wag their tail to the right stayed cool; they even began to approach the dog on the screen, suggesting they saw the right-side wagging as a signal of companionship, the researchers said.

But right-left tail wags may not be a form of secret dog language, the researchers say. They think the direction of tail wagging — and other dogs' responses to it — could arise from automatic responses rooted the different hemispheres of the canine brain.

Just like the left and right sides of the brain in humans are thought to control different emotions and behaviors, the direction of wagging might match hemispheric activation, explained study researcher Giorgio Vallortigara of the Center for Mind/Brain Sciences of the University of Trento in Italy.

"In other words, a dog looking to a dog wagging with a bias to the right side — and thus showing left-hemisphere activation as if it was experiencing some sort of positive/approach response — would also produce relaxed responses," Vallortigara said in a statement.

"In contrast, a dog looking to a dog wagging with a bias to the left — and thus showing right-hemisphere activation as if it was experiencing some sort of negative/withdrawal response — would also produce anxious and targeting responses as well as increased cardiac frequency," Vallortigara added. "That is amazing, I think."

Vallortigara and colleagues say understanding these responses could help improve dog welfare, and perhaps even help develop new strategies to keep them calm at the vet.

The research was detailed today (Oct. 31) in the journal Current Biology.