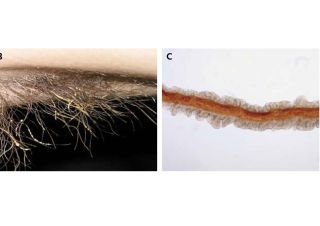 A bacterial infection of armpit hair was the cause of one man's body odor. Above, infected armpit hair (right) and view of hair under a microscope (left).
(Image: © The New England Journal of Medicine ©2013.)

One man's irrepressible body odor was the result of a bacterial infection of his armpit hair, according to a new report of the case.

The 40-year-old man told his doctors he'd had armpit odor and "dirty" armpit hair for the last four years.

There was a "creamy yellow" substance on the man's armpit hairs. Looking at the hairs under the microscope, the doctors saw that the hairs were surrounded by an "opaque material" that was only on the hair surface. [13 Oddest Medical Cases]

The doctors diagnosed the man with trichomycosis axillaris, which is an infection of hair shafts caused by the bacteria Corynebacterium tenuis, the researchers said. The infection can produce yellow, black or red masses around hair shafts.

The bacteria tend to grow on hair in moist regions of the body — mostly armpit hair, but sometimes pubic hair.

The odor that comes with the condition is due, in part, to the ability of the bacteria to metabolize testosterone in sweat into smelly compounds, the researchers said.

The man had his armpit hair shaved, and was treated with aluminum chloride (used to treat sweating) as well as the antibiotic erythromycin. The odor went away several weeks later, his doctors said.

The report, described by researchers in Beijing and Madrid, is published today (Oct. 30) in the New England Journal of Medicine.