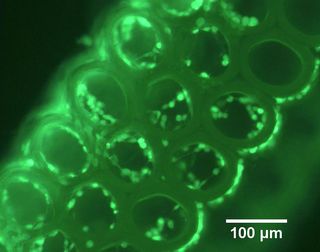 For the first time, researchers have added a natural compound to the manufacturing chemicals usually used to create small medical implants by 3D printing.

By using riboflavin, also known as vitamin B2, in 3D-printed structures such as artificial tissues or medical implants, the scientists say they could create devices that are less harmful to cells.

In medicine, 3D printing is being increasingly used to create scaffolds for growing artificial tissues, or in implants such as vascular grafts. But traditional 3D printing methods involve polymers that can be toxic to living cells.

"Our effort is the first to use riboflavin in 3D printing at small-length scales," said study leader Roger Narayan, a biomedical engineer at North Carolina State University and the University of North Carolina at Chapel Hill. [7 Cool Uses of 3D Printing in Medicine]

Riboflavin is found in foods such as cheese and leafy vegetables.

In their work, the researchers used riboflavin as a "photointiator," which is a chemical in a 3D printer that is activated by light (usually from a laser), and breaks down into other chemicals that allow the 3D printing ink to polymerize and solidify.

"Most 3D printing techniques have toxic photoinitiators," Narayan told LiveScience. "The idea here is to find a more biocompatible type of photoinitiator," he said.

With a titanium-sapphire laser as a light source, the researchers created 3D, honeycomblike scaffolds, and then lined the scaffolds with cells from a cow's aorta.

The researchers noted that riboflavin is a less efficient photoinitiator than the more toxic ones currently used in the 3D printing industry, but said this limitation could be overcome.

However, studies over longer time scales will be needed before 3D-printed scaffolds using riboflavin are used in medical implants, Narayan said.