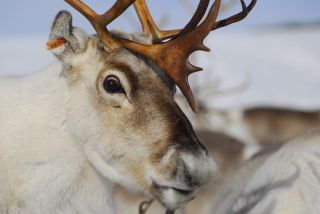 A close-up view of a reindeer in the Arctic.
(Image: © © Kia Hansen)

Reindeer may be best known for fictional Rudolph's glowing red nose, but now scientists find the animals can alter color elsewhere as well — the backs of their eyeballs change from gold in the summer to blue in the winter.

This change in color helps reindeer eyes capture more light during the dark winter months in the Arctic, scientists added.

Neuroscientist Glen Jeffery, who investigates vision at University College London, was sent a collection of reindeer eyes from the Arctic 12 years ago, some from reindeer killed in the summer, some in the winter. [See Photos of Reindeer & Color-Changing Eyes]

"I opened the eyes up on my lab bench and almost fell off my chair," Jeffery said. "The differences were so dramatic, and I knew no one had ever seen anything like that before. However, it has taken us 12 years to slowly find out what is going on and why."

The quest for an answer involved research teams flying to the Arctic regularly each year.

"The environment can be brutal, with 24 hours light in summer and 24 hours darkness in winter," Jeffery said.

The Sami people herd reindeer in the Arctic, and the scientists often collected eyes from reindeer they bought from Sami herders.

"Thousands of animals would suddenly turn up, and they were all turned into meat in a couple of days, but this would go on miles from anywhere," Jeffery said. "Once, we drove deep inland for about four hours in a 4X4 [truck] close to the winter solstice — had to take a 30-kilometer (18 miles) diversion into Finland because wine is much cheaper there than anywhere else in Scandinavia. Magical trip — hardly saw anyone on the journey."

The scientists investigated a reflective layer behind the retina of the reindeer's eyes. The retina, located on the back of the eyeball, contains the eye's light-sensitive cells.

The color of the light reflected by reindeer eyes is related to the spacing of collagen fibers in the reflective layer, technically known as the tapetum lucidum. Reindeer apparently increase pressure inside the eyeball during the winter to compress these fibers together, and reducing the spacing between these fibers makes the eyes reflect bluer light.

The reflective layer bounces light back through the eye. In the summer, it turns golden in many reindeer, reflecting most light through the retina, helping the reindeer deal with the nearly continuous Arctic summer daylight. However, in the winter, it turns deep blue, reflecting far less light out the eye, helping the reindeer cope with the nearly continuous Arctic winter darkness.

Moreover, the shift to blue may also scatter light through larger numbers of light-sensitive eye cells rather than directly reflecting it out from the eye through fewer numbers of these cells. As such, their eyes end up capturing more light in the winter when they need it most, with a trade-off of less visual sharpness.

These findings are the first known instance of mammal retinas altering their structure due to seasonal changes in environmental light, the researchers say.

"No one has ever seen anything like this in a mammal before, let alone such a large shift," Jeffery said.

The scientists want to further see whether these eye changes also influence how the reindeer see ultraviolet light, which is very rich in Arctic winter light.

"We have some evidence that the blue reflection in winter amplifies ultraviolet light, while in summer it suppresses it," Jeffery said.

In addition, the researchers want to investigate the reflective layers in the eyeballs of other Arctic animals. Surprisingly, the three polar bear eyes the scientists have each possess "the most diminutive tapetum lucidum I've ever seen and unlike any other bear — it's milky with no color. There has to be a reason for that."

The scientists detailed their findings online Oct. 30 in the journal Proceedings of the Royal Society B: Biological Sciences.