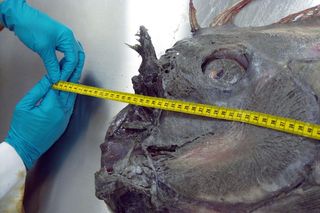 A NOAA biologist measures the head of a giant oarfish that washed up in Southern California.
(Image: © NOAA)

Researchers have dissected the two deep-sea oarfish that washed ashore in southern California this month. So far, they found that one was teeming with worms and the other was about to have babies.

On Oct. 13, an 18-foot-long (5.5 meters) oarfish was dragged to shore by a snorkeler at Catalina Island. Because the species lives in deep, dark waters, up to 3,000 feet (915 meters) below the surface, intact specimens are rarely discovered. Strangely enough, another smaller oarfish washed ashore north of San Diego just a few days later.

Parasitologists from the University of California, Santa Barbara jumped on the once-in-a-lifetime opportunity to study the elusive creature and asked for a small tissue sample of the oarfish that washed up at Catalina Island. When the researchers cut through a tiny portion of the fish's intestine last week, they found it was carrying a heavy parasite load. [Photos of the Largest Fish on Earth]

"Our findings say that these are actually majorly parasitized fish," Armand Kuris, a professor of zoology at UC Santa Barbara, said in a statement. "In this little piece of intestine that we had, we found quite a few of these rather large larval tapeworms. One of them was about 15 centimeters (6 inches) long."

Kuris and colleagues say they also found other parasites that provide insight about the diet of the serpentlike fish. Embedded in the intestine was the hooked proboscis of an adult spiny-headed worm. Parasites hop from host to host throughout their life cycle, so the fact that this worm was mature suggests the oarfish ate its former host, likely krill or some deep-water crustacean, the researchers said.

The second oarfish, which measured 14 feet (4 m) long, is also under scientific scrutiny. Last week, researchers the Scripps Institution of Oceanography reported that they found hundreds of thousands of eggs inside the beast's 6-foot-long (1.8 m) ovaries, according to the Associated Press.

While the causes of death for both of the oarfish remain mysteries, researchers have some working hypotheses.

Scientists with the U.S. National Oceanic and Atmospheric Administration's Southwest Fisheries Science Center performed a necropsy (an animal version of an autopsy) on the smaller oarfish that washed up north of San Diego. Russ Vetter, a NOAA biologist, said in a podcast from the agency that the fish was quite fresh and seems to have stranded shortly before it died.

Vetter suspects the creatures may have been carried closer to shore by a strong ocean current, which the oarfish, being poor swimmers, could not escape. Though they resemble the fearsome sea serpents of folklore, a recent video of a live oarfish in the Gulf of Mexico revealed that the fish are actually quite motionless in their natural habitat; they use paddlelike fins that help them balance as their snakelike bodies hover vertically in the water.

Growing more than 30 feet (9 m) long, oarfish are the world's longest bony fish, a group that includes almost all fish except sharks and rays. (Whale sharks are the largest of all fish.) Further examination of the preserved tissue samples of the beached fish could help scientists uncover more secrets about the species.

"With careful chemical analysis of the lipids and the proteins, we should be able to tell what its diet is and where it fits in the food chain," Vetter said in the podcast, adding that DNA will allow scientists to examine how the oarfish evolved and how the fish is related to other species.