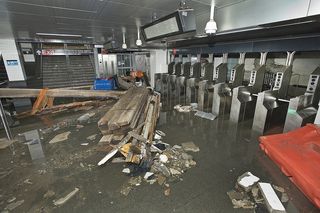 The water just kept flowing. It streamed through the streets of lower Manhattan, pouring into subway entrances, cascading into ventilation grates and pooling inside tunnels.

When Superstorm Sandy hit New York a year ago, it caused a massive, 14-foot storm surge, the likes of which the city had never seen. Nine out of the 14 subway tunnels beneath rivers around the city flooded, and the subway was shut down for days. But the Metropolitan Transit Authority (MTA) took precautions to head off the worst impacts, experts say.

Before the storm hit, the MTA moved its trains out of flood-prone areas and took out the electric signals in the tunnels. The tunnels flooded. Afterward, subway workers pumped the water out and replaced the electric signals. Within a week, 80 percent of subway service had been restored, newspapers reported. [On the Ground: Hurricane Sandy in Images]

The MTA's preparations saved the city significant time and money in getting the system up and running again, said Klaus Jacob, a climate scientist at the Lamont Doherty Earth Observatory at Columbia University in New York, one of the people perhaps most responsible for showing how such epic flooding would affect the city's subways.

"Instead of the one to 10 days that much of the system was down, it would have been down at least three weeks, which saved the city on the order of $10 billion," Jacob said. That's two-and-a-half times the daily economic output of New York City, he added.

Jacob models the risks of extreme weather events and how climate change exacerbates them. He has been involved in long-term planning for sustainability, working with New York stakeholders including the MTA, New Jersey Transit and others.

Two years before Sandy, the NY governor's office commissioned a report on how the state should adapt to climate change. That report forecast the impact a 100-year flood— an event that has one-in-one-hundred odds of a occurring in any given year — would have on the city's infrastructure.

The study predicted that most of the city's subway tunnels would flood, probably in less than an hour. And if all 14 tunnels under the river were to flood, it would take about five days per tunnel to pump all the water out.

The MTA took these threats very seriously, Jacob said. "It was clear," in the run-up to Sandy, he said, "that the MTA really had taken notice of the risk and started to prepare."

Before Sandy hit, MTA employees moved their rolling stock (all vehicles that move on a railway) out of areas known to flood. Workers blocked off flood-prone subway entrances with plywood and sandbags.

"It worked pretty much everywhere in the system except lower Manhattan," said MTA spokesman Kevin Ortiz. (A giant inflatable plug, still under development, may have prevented more flooding.)

In the subway tunnels, electrical signals, relays and other equipment — "any type of component that could be quickly removed" — were taken out and stored above ground.

If the MTA had left the electrical signals to flood, it would have had to take them apart, dry them and reassemble them — a process that could take weeks, Jacob said. The equipment is 50 to 100 years old, and the replacement parts aren't sold anymore.

Many of the report's predictions were "eerily verified" by Hurricane Sandy, Jacob said. But by heeding the report's warnings and developing strategies to minimize the impact of flooding, he said, the MTA prevented a much longer subway closure and saved the city billions of dollars.

But other transit operators weren't so foresighted. New Jersey Transit didn't move its trains before the surge hit, and lost a large part of its rolling stock as a result, Jacob said. When asked about the losses, NJ Transit declined to comment. The agency lost about a quarter of its total fleet, according to the NJ Transit website. One year later, 93 percent of NJ Transit's fleet is now operable. [Video: NJ Sandy Flooding Seen in Security Footage]

Not out of the woods

The MTA's preparations for Hurricane Sandy were admirable — as good an outcome as could be expected under bad circumstances, Jacob said. But the city hasn't spent money on "hard changes" to protect transportation infrastructure from future severe weather threats.

"Are we as vulnerable today as we were on the day of Sandy? I would say yes," Jacob said.

Making the necessary changes will take years and billions of dollars of investment, he added.

For example, many of the subway tunnels with stations at the surface lie in flood zones. The ventilation grates are a hazard because floodwater easily flows into them. These grates should be sealed and replaced with ventilation systems like those already used in under-river tunnels, Jacob said. The technology is available, but it comes down to politics, he said.

Storms like Sandy are sure to happen again, and their effects will only become more severe as sea level rises. Ultimately, these problems won't be fixed by engineering solutions, Jacob said, but by retreat. All these solutions can do is buy time.

"The bottom line is, we have not faced up to what climate change will cost the nation and the rest of world," Jacob said.