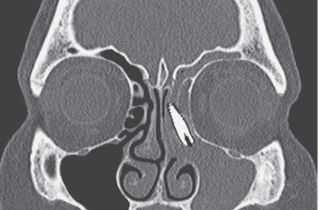 A 57-year-old woman in Italy was found to have a dental implant in her sinus. Above, a CT scan showing the displaced implant.
(Image: © The New England Journal of Medicine ©2013.)

A 57-year-old woman in Italy who went to the doctor with inflamed sinuses and facial pain had an unusual diagnosis: a dental implant in the sinus.

The woman had undergone oral surgery about two years before to place an implant — a 2-centimeter long (0.79 inch) metal screw designed to hold in place a replacement for a missing tooth — in her upper jaw. But surprisingly, an inspection of her mouth revealed the implant was not there. Instead, the gums covering the area of her missing tooth were healed, and her remaining teeth were healthy.

A CT scan showed the implant to be in her sinus cavity, next to her left eye. The researchers performed surgery to remove the dental implant, after which the woman's sinus symptoms went away. Eight months later, she remains healthy, according to the report of the case published today (Oct. 23) in the New England Journal of Medicine. [Chew on This: 8 Foods for Healthy Teeth]

The researchers said the implant may have been wound up her sinus because of improper positioning, or as a consequence of tissue around the implant eroding, as well as bone loss.

Study researcher Alberto Schreiber, of the University of Brescia in Italy, said that he suspects the implant had been in the woman's sinus for at least a year, and perhaps even since the patient's surgery two years before.

Previous cases of dental implants ending up in the sinus have been reported, he said. In one case, an implant ended up in the base of the skull, Schreiber told LiveScience.

Dr. Eric Cohen, an ear nose and throat specialist at Lenox Hill Hospital in New York, said that dental implants can migrate if they do not properly integrate into the jawbone. "The bone may have been too thin" for the implant to properly integrate, said Cohen, who was not involved with the woman's case.

Because the roots of upper teeth can extend up into the floor of the sinus, dental implants (which are designed to act as tooth roots) can push into the sinus, and allow bacteria to enter, he said.

On the other hand, Dr. Jack Caton, chair of the Division of Periodontics at the University of Rochester Medical Center, speculated that the implant became displaced during the original surgery to implant it. Caton pointed out that there was no crown attached to the implant, which doctors would have likely added at some point if the surgery was successful.

"The patient may not have been informed of this intraoperative complication by the surgeon, or may not have understood any information that was given," said Caton, who also did not treat the patient.

In his own experience, Caton has seen a dental implant become displaced into the sinus during oral surgery, which doctors then had to surgically remove.

The case report is published today (Oct. 23) in the New England Journal of Medicine.