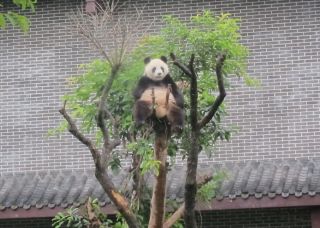 Biologists estimate that only about 1,500 giant pandas live in the wild today, confined to six isolated mountain ranges in south-central China. Panda fossil remains suggest the charismatic bears once roamed through parts of Burma and northern Vietnam as well, but have since suffered from environmental change and habitat fragmentation, and have been listed as endangered by the International Union for the Conservation of Nature since 1990.

Researchers based at Zhejiang University in China who were interested in determining the genetic diversity within the dwindling wild population recently collected genetic material within either the blood, skin or fecal materials of 218 wild pandas from all six isolated mountain ranges the bears now roam. [In Photos: Giant Panda Mei Xiang Gives Birth]

The team specifically analyzed the bears' major histocompatibility complex (MHC) — the part of the genome that embodies parts of the immune system — because this is known to be an adaptive loci, meaning that different populations adapt to have different MHCs. Other parts of the genome are the same within all individuals of a given species, and would therefore not be good indicators of genetic diversity.

Animal populations need genetic diversity, because, otherwise, a single threat to the population — such as the introduction of a certain pathogen — could theoretically wipe out the entire population, if all individuals were equally prone to it.

"The assumption is that a decrease in genetic variation and a lack of exchange between isolated populations increase the likelihood of extinction by reducing the population's ability to adapt to changing environments," the team writes in a report that details their findings today (Oct. 21) in the journal BioMed Central.

The team says the giant panda shows more diversity than several other endangered species, including the Bengal tiger and Namibian cheetah, but less diversity than the more stable brown bear.

Paul Hohenlohe, a biologist at the University of Idaho who was not involved in the study, said that this diversity suggests pandas did not experience the same type of population "bottleneck" that biologists think cheetahs experienced at some point in the animal's history; that bottleneck caused cheetahs to become more genetically uniform than many other wild animals.

Management groups can also use the new genetic data to prioritize habitat restoration projects to revolve around genetically diverse populations.