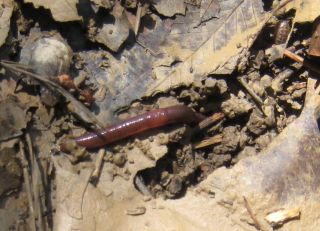 Earthworms may release a significant amount of carbon dioxide into the atmosphere, some past studies have concluded, but new research suggests these dirt-eaters may offset their carbon footprint by trapping the mineral in the soil.

Earthworms — and the microbes that live within them — affect the amount of carbon dioxide produced in the soil, the amount stored as "stabilized carbon," and the amount released as "mineralized carbon," or carbon dioxide. A collection of recent studies found that earthworms increase carbon dioxide emissions from soil by 33 percent. But these studies were short-term, and didn't account for the carbon the worms store away underground, researchers behind a new study say.

Earthworms appear to stabilize more carbon than they mineralize, acting as a kind of "carbon trap," said study researcher Weixin Zhang of the Chinese Academy of Sciences in Guangzhou, China."However, the global contribution of earthworms to soil carbon storage, and whether the degree of that enhancement would be of a magnitude to have any measurable negative effect on global warming, are still uncertain," Zhang told LiveScience.

To determine the worms' net carbon footprint, Zhang and colleagues measured how much carbon was stored and released by different soil samples. Some samples contained Asian earthworms (Amynthas agrestis) or European earthworms (Lumbricus rubellus), while others contained soil alone.

Zhang's team gathered data over a period of 23 days. Next, they added leaf litter to soil samples containing worms, soil that had been "worked" by worms" (which digest and excrete plant and animal matter in the soil), or unworked soil, and took measurements for an additional 31 days.

The researchers devised a mathematical formula to calculate how much carbon the worms released in the atmosphere compared with how much they stored in the soil.

While the earthworms released a lot of carbon dioxide initially, they later offset that carbon release by trapping the element in the soil, usually by excreting digested soil in structures called casts, results showed. Both worm species emitted similar amounts of carbon dioxide.

Interestingly, the total amount of carbon dioxide released from soil that contained worms was approximately the same as the amount released by soil without worms. The findings were detailed today (Oct. 15) in the journal Nature Communications.

The previously proposed 33 percent increase in carbon dioxide emissions by earthworms is likely an overestimate, the researchers write. In addition, the amount of carbon the worms store in soil is likely an underestimate, they add.

Nevertheless, it's not clear whether earthworms have a significant enough impact on reducing carbon emissions to affect climate change, Zhang said. It's hard to measure the amount of carbon the worms stabilize in the real world, and there are many other species of earthworms and ecological niches that might cycle carbon differently, Zhang said.