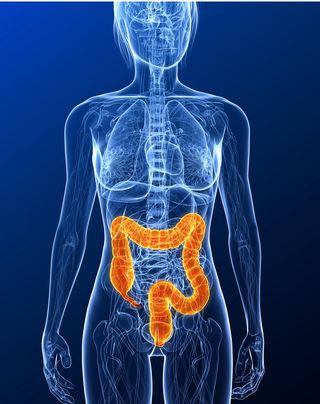 Ulcerative colitis affects only the top layer of the large intestine, causing swelling and open sores or ulcers to form on the surface of the lining. These ulcers can rupture, expelling blood and pus. In severe cases, the ulcers can weaken the intestinal wall to the point of causing a hole, leaking the contents of the large intestine into the abdominal cavity. This can lead to serious infection and requires immediate surgery.

Though the causes of ulcerative colitis are unknown, doctors theorize that the immune system is attacking the digestive tract because of the normal bacteria that exists there. It runs in families and is generally diagnosed before the age of 30, according to the Mayo Clinic.

Symptoms of ulcerative colitis include belly pain or cramps, diarrhea, and rectal bleeding. Ulcerative colitis can also be accompanied by a fever, diminished appetite and weight loss. Because the patient has a hard time absorbing nutrients from food, it can cause other symptoms like joint pain, eye problems, and liver disease.

But people with inflammation from ulcerative colitis may not always show symptoms. "Often times, they judge their success based on symptoms, but symptoms may not actually not tell the story," said Dr. Razvan Arsenescu, medical director of the Inflammatory Bowel Disease Clinic at Ohio State University's Wexner Medical Center.

To diagnose ulcerative colitis, doctors must rule out diseases and conditions with similar symptoms, like Crohn’s disease, irritable bowel syndrome and diverticulitis. To do so, they will conduct tests like colonoscopies, sigmoidoscopies, blood tests and stool samples.

Colonoscopies and sigmoidoscopies allow doctors to examine the large intestine. With an endoscope, a wirelike device with a light and camera attached to its end, doctors can looks for signs of ulcerative colitis, such as inflammation, and take biopsies that can best tested for the disease, according to the Mayo Clinic.

Blood tests allow doctors to check for anemia, a condition when the person does not have enough red blood cells, possibly from too much bleeding. Moreover, doctors can check blood samples for signals of inflammation, such as C-reactive protein or an increased number of white blood cells, Arsenescu told Live Science.

Because ulcerative colitis affects everyone differently, each patient must work with his or her doctor to reduce symptoms and minimize flare-ups. Treatment is based on severity. About 54 percent of people have a mild case of the disease, 27 percent have moderate symptoms and 19 percent have a severe case, according to American Family Physician.

Some patients with mild symptoms can take Imodium or other anti-diarrhea medications. Others with more serious symptoms will use prescription medications, like aminosalicylates, steroid medicines or other immunosuppressants. Since the immune system is causing many of the related symptoms, suppressing it will also suppress symptoms.

However, steroids are not a long-term solution. They can increase risk of infection, increase blood pressure and cause weight gain. In some people, steroids can unmask diabetes and increase the risk of cataracts, Arsenescu said.

"We try to think of steroids as band aids," he said.

Most people take immunosuppressant medications through infusions or injections. Infusions, which use an IV drip, are typically taken once every two months. Injections are taken once every week or two, Arsenescu said.

Some medications can be taken either by infusion or by injection, such as Infliximab, a drug that targets a protein that stimulates inflammation in the body, Arsenescu said.

Immunosuppressant drugs may help people manage ulcerative colitis, but they also increases a person's susceptibility to other illnesses. "So we recommend vaccinations in all patients," especially vaccines for flu, pneumonia, whooping cough, HPV and hepatitis B, Arsenescu said.

Immunosuppressant medications can also increase the risk of skin cancer, and people taking them should have yearly checkups with a dermatologist who can look for risk signs, such as irregularly shaped or colored moles. Women should also get pap smears to check for cervical cancer on a yearly basis, Arsenescu said.

Some patients will notice a correlation between a specific food and flare-ups. While this varies from person to person, it makes sense to avoid the foods that can worsen ulcerative colitis. But it’s important for patients to eat a healthy diet to keep their weights up. Fruits and vegetables and other foods in the Mediterranean diet have anti-inflammatory compounds, and may help people with the condition, Arsenescu said.

Patients with severe symptoms may require surgery to remove their colons. Between 25 and 40 percent of people with ulcerative colitis need surgery at some point, according to doctors at the University of California, San Francisco. Removing the colon completely cures ulcerative colitis, and can also prevent colon cancer. But because it is a drastic step, this is not a surgery to be taken lightly.

After the large intestine has been removed, surgeons need to allow the body to get rid of food waste. In one procedure, a small opening is made at the front of the abdomen, then the end of the ileum brought through the hole, allowing waste to drain out of the body. An external pouch is fitted over the opening, collecting the waste. The patient empties the pouch several times a day.

Another way some doctors approach this is to attach the ileum to the inside of the anus where the rectum was, creating an internal pouch for waste. Waste collects in this pouch and is eventually passed out of the anus, in the usual manner.

Like other forms of IBD, ulcerative colitis takes an emotional toll on the patient. In addition to the debilitating symptoms, sometimes the anxiety or fear of an accident can make symptoms worse. The isolation, embarrassment and anxiety can lead to depression. But there are organizations that can help. The Crohn’s and Colitis Foundation of America have chapters across America, providing support and a sense of community. Counseling and therapy may also help with the emotional difficulties that IBD can cause.